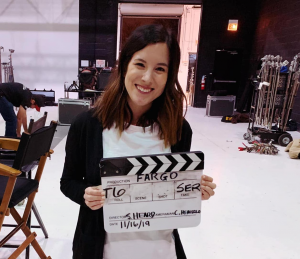 After graduating in 2012, I moved from Oshkosh to Los Angeles where I have lived ever since. I currently work at FX Networks, which is part of The Walt Disney Company.

What is your current role/project?

Since 2018 I have worked as a producer of social media and content at FX. I’ve had the opportunity to work on the marketing campaigns for a large slate of shows, from dramas like Pose to comedies like What We Do In The Shadows. I help manage the entire lifecycle of a show’s social media campaign, from pre-premiere to post-season, producing everything that goes up on the pages—stills, video and GIFs to live streams and event coverage. My favorite part of my job is getting to travel to show sets and take part in marketing shoots where I get to see my original ideas come to life.

What is your proudest moment in your career thus far?

My favorite professional experience so far has been getting to work with Patrick Stewart when I was a writers’ PA on his Starz show Blunt Talk. But a close second to that would be traveling to the set of It’s Always Sunny in Philadelphia to shoot a custom promo with Danny DeVito.
What person, course or experience most influenced you while at UWO/in RTF?
My professors at UW Oshkosh, specifically Randall Davidson, Doug Heil and Justine Stokes, were the ones to motivate me to pursue my goals while I was at UW Oshkosh. They encouraged me to dream big, and taught me valuable lessons I still think about and use in my career. Doug’s Primetime TV Writing class, in particular, is one I wish I could go back in time and take again for the first time.
Any fond memories you wish to share?
Having the opportunity to take part in multiple Titan TV shows taught me so much. Our show Tales From A College Dorm won Best Comedy at the National College Broadcaster’s Inc. Student Production Awards in 2010, which was a really fond memory. I also loved getting the chance to write and produce Titan TV’s very first web series, Infinity Unlimited, which is still probably up on the internet somewhere. 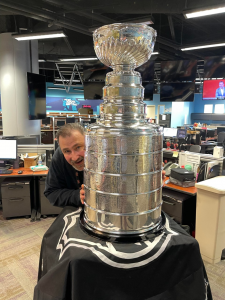 I work for CNN in Atlanta. Prior to that I was at The Weather Channel and local stations in Tampa and Green Bay.

What is your current role/project?

I have the best job in the world. I’m a sports producer. I get to watch games and then tell the world about them on the various CNN channels including HLN and CNN International.

What is your proudest moment in your career thus far?

I’ve been lucky enough to cover everything from the Olympics and the World Cup to how high school football teams deal with extreme heat during practices, but I got the opportunity to field produce CNN’s coverage of the 2014 Final Four in Arlington, Texas. Wisconsin lost a heartbreaker to Kentucky with a 3-pointer in the final seconds. I was also outside Truist Park in Atlanta covering the Braves’ World Series victory last season.

What person, course or experience most influenced you while at UWO/in RTF?

There are so many people that helped shape my career before I even had a job in TV. Ben Jarman and Karla Berry always encouraged me to take chances and make big swings. Even if they don’t work out as planned, you’ll still gain more knowledge for the next time. Dr. Judy Thorpe taught me that writing for the eye is much different than writing for the ear. Doug Heil showed me the artistic side of production and that there’s more to it just being a button pusher and a knob turner. Doc Snyder’s guidance was invaluable. I’ll always treasure the chats we’d have during the Jazz City recording sessions. But I definitely learned the most from sitting in Master Control for hours and hours every day soaking up everything I could from Dwight Poppy and Bill Kerkhof. I spent so much time with them that my mother thought I had moved in to the basement of the AC Building!

The hands-on experience we got at UWO is unrivaled. Working on professional equipment as a student definitely gave me an advantage when I hit the job market. I graduated already having a reel that included newscasts, long-form political shows and even live football games. Thinking about sitting outside Titan Stadium in a cold, stripped out trailer on a chilly fall evening still puts a smile on my face.