The UW Oshkosh campus has been the setting for the start of many great love stories. Whether you met in chemistry lab, art class or at Reeve Memorial Union, we’d like to hear your story. 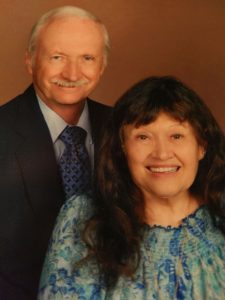 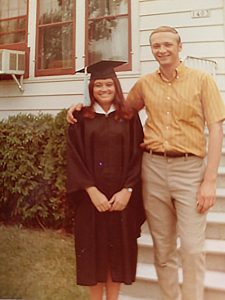 Fred was attending classes during summer session 1970 as a reintroduction to academic life, after serving 3.5 years in the Air Force. First-year, third-grade teacher Annette was taking continuing education courses. The two met at the beach on Lake Winnebago.

“Annette and I were inseparable the rest of summer school and during the next 2.5 years we commuted between Oshkosh and Green Bay to be together,” Fred said. “After switching business school majors twice, I finally found my calling in accounting. Dwight Edmonds and Harry Ostendorf were my two favorite accounting teachers.”

After a few lonely months apart when Fred headed for a job in Colorado after graduating, the couple was married on April 21, 1973. They soon found their way to Kearns, Utah, when Fred took an auditing job with the federal health, education and welfare department.

“Thanks to a strong UWO accounting program, I passed the CPA in 1977 and that was the beginning of a long federal career in several cities with promotions along the way,” he said.

With their two young sons in tow, the family often traveled to job assignments in a truck camper, so we could go sight-seeing, camping and fishing along the way.

The couple took early retirement in 2000 and have now settled in Pueblo, Colorado. “Annette is finished moving but I would like a small piece of Wisconsin lake property, where we can park our RV and maybe build a small summer place,” Fred said. “We have been married for 45 years and are still very much in love with each other and life!”

A shared love of nature and a passion for lifelong learning make alumni Anita MS ’83 and Gerald Carpenter ’65, of Oshkosh, a perfect pair. Already a pharmacist, Anita returned to graduate studies at UW Oshkosh to learn more about biology and the great outdoors. Gerald says he never really stopped going to school, as he served more than 40 years as a reference librarian at UWO, before retiring in 2010. Since marrying in 1974, the couple has watched their beloved campus grow and thousands of college students follow their own educational quests. Today, giving back to their alma mater comes naturally to the Carpenters … a special way to say “thank you” for a lifetime of learning and new opportunities.

The chemistry between alumni Sarah (Kieper) Garvey ’06, and Michael Garvey ’07, began in fall 2005. Soon after studying together for a physical chemistry laboratory test, Sarah and Michael began dating. They married in July 2008 and are both pursuing doctorates in chemistry. “It’s amazing to think how taking one class could change your life so drastically,” Sarah said. “We owe it all to UWO. It’s a wonderful school, and we are proud to be alumni.”

Cupid must have been on duty as Joe Jones ’71, prepared for his first- ever college date back in 1967, with education major Maggie Bast, ’68. “That evening we began a love and best friend relationship that has lasted for nearly 40 years,” Joe said. Just as Wisconsin State University at Oshkosh was changing its name to the University of Wisconsin Oshkosh, “we were planning a name change of our own, and Maggie Bast became Maggie Jones in January 1969,” he said. “In many ways, the college years were the best times of our lives, but now that we’re in our 60s, we realize that every decade provides aspects that make that time the best.”