A once-in-a-lifetime opportunity to see the Bayeux Tapestry

History of the Bayeux Tapestry

Learn fun facts on the history of the Bayeux Tapestry.

Attend the Exhibit and Lecture Series

Get hands-on experience on March 30.

Created between 1070-1080, the Bayeux Tapestry is among the most important works of art from the Middle Ages and an invaluable historical document that narrates – through imagery – the 1066 invasion of England by William the Conqueror, Duke of Normandy. It is not, in fact, a tapestry at all but rather an embroidered “pictorial hanging” made of a strip linen roughly 230 feet long and 20 inches wide.

What makes the Bayeux Tapestry extraordinary at the 173 embroidered scenes that depict the end of the English King Edward the Confessor’s life, aspects of his successor Harold Godwinson’s career, William’s plans for invasion, his landing in England and his victorious battle at Hastings.

Beyond the specific Norman and Anglo-Saxon conflict, the main scenes of the Tapestry offer an almost unparalleled view of the 11th-century daily life, from how servants prepared medieval meals to how preparations were made for a naval invasion. Even Hailey’s Comet, which appeared shortly before William’s 1066 invasion, blazes as an omen in the work. 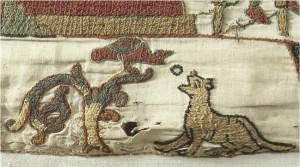 The borders offer snippets from Aesop’s Fables that provide subtle commentary on the larger scenes.

Mysteries remain, however. The massive hanging provides a mostly, but not completely, Norman view of William’s conquest of England and defeat of Harold II’s Anglo-Saxon forces.

And despite the Tapestry’s prominence, no one knows exactly who commissioned the piece, who embroidered it (though most certainly women), or even whether it was executed in England or Normandy. As a result is remains a vital source for interpretation that continues to captivate viewers to this day.