scenes depict the Battle of Hastings

pieces of linen fabric are sewn together

shades of wool provide effects of perspective and depth

Explore the history of the Bayeux Tapestry

History of the Bayeux Tapestry

The Battle of Hastings between Norman and Anglo-Saxon forces

In October 1066, William, Duke of Normandy, staged the last successful invasion of England. Considering himself the rightful heir of Edward the Confessor, the King of England who had died early in 1066, William received papa 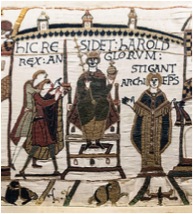 l confirmation of his position and sought to overthrow the new occupier of the throne, Harold Godwinson. Harold, the son of the Earl of Wessex, had been chosen by the nobles of England to replace Edward. However, these were not the only candidates for the throne, as Harold’s brother Tostig also fancied himself as ruler, as did the King of Norway, Harold Hardrada. The latter claim is not as strange as it might appear, as England had been ruled by Scandinavian rulers from 1014 to 1066, the result of the last of the Viking raids on England. All of these men were prepared to fight for the throne.

While William prepared a fleet to sail from Normandy to the coast of England in late September and early October 1066, Harold had first to battle an army of Harold 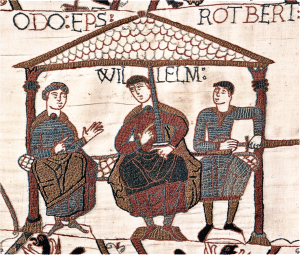 Hardrada’s and Tostig’s men in Northern England at the Battle of Stanford Bridge on 20 September. Here he was
victorious and both the King of Norway and Tostig were killed. At the moment of Harold’s victory, the winds changed, allowing William’s ships to sail.

A fortunate combination of timing, bravado, and military skill allowed William to prevail over Harold at the Battle of Hastings on 14 October 1066. The victory made William the king of England and ushered in a new age of Norman dominance in England and indeed most of Britain for the next 150 years. After 1066, England was no longer tied firmly to the Northern Scandinavian world, as it had been for much of the early medieval period, and was now united with Normandy and the continent with momentous consequences for medieval Europe. 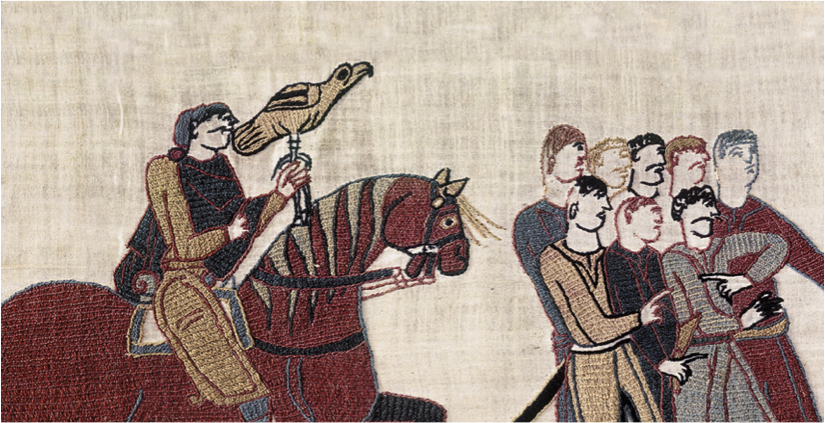 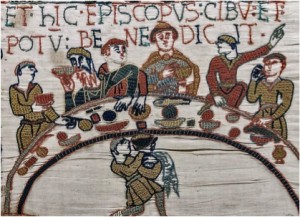 Banquet scene from the Bayeux Tapestry

Historians often look to the Bayeux Tapestry as an illustration of the events leading up to the famous Battle of Hastings that brought William the Conqueror to power in 1066. But can we take it as straightforward history?

In fact, it more closely resembles the sort of epic poetry that would be performed by bards at a banquet and probably owes much of its narrative structure to one of the earliest epic poems written in the Anglo-Norman vernacular, La chanson de Roland. 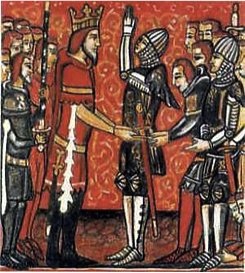 The Song of Roland (reportedly sung during the Battle of Hastings) recounts the rout of Charlemagne’s army in 778 AD when his army was decimated by a Muslim force in northern Spain and the French knight Roland, a paradigm of knightly virtues, died a heroic death.

Translated, as it were, from word to image, we can speculate what kind of audience the unknown makers of the Bayeux Tapestry hoped to entertain by adopting the form of the epic poem.

The Bayeux Tapestry: Art of the Loom and the Needle in Women's Hands 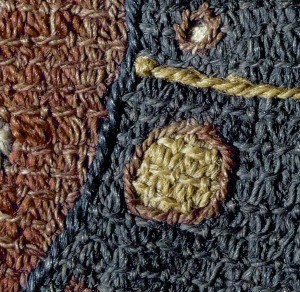 Detail of the Bayeux stitch

Although it is called the Bayeux “Tapestry,” the nearly 230 foot long textile is actually not woven, but is made of linen embroidered with eight different colored wools. And although the scenes show an almost exclusively masculine society of warfare, castle and shipbuilding, and political maneuvering, we know that the anonymous artists of most textile production in the Middle Ages were women.

Who made the tapestry? Did women design the scenes or were they given patterns to follow by male supervisors? Was there one person in charge of the entire design, or did the tapestry narrative evolve over time? 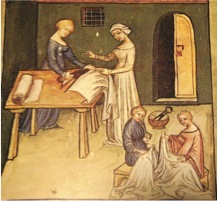 The main scenes are heroic and historic, but what about the events taking place in the top and bottom margins? Some of them point to moralizing stories from Aesop’s Fables while others are downright naughty.

Was it made in Norman France, where William came from, or was it made in Anglo-Saxon England, famous for high quality embroidery production?

By looking at other media in Medieval art, such as manuscript illuminations and luxury goods, we can speculate about the roles of women as artists and about the type of society that would have produced such a visually rich object. 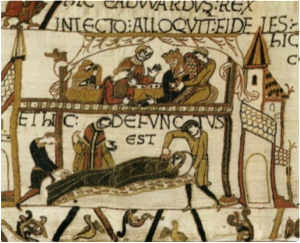 Death of Edward the Confessor

The Bayeux Tapestry depicts numerous historical events, including the death of King Edward the Confessor, Harold swearing loyalty to William on holy relics, the amassing of William’s invasion fleet, and the death of Harold at the Battle of Hastings, to name just a few. 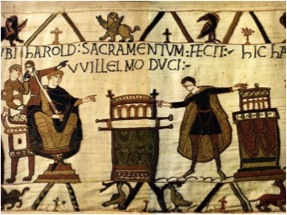 Harold swearing the oath of loyalty to William

In addition, the Tapestry is packed with details both routine and extraordinary, such as clearing forests, preparing banquets, making ships and loading them for the crossing of the Channel, but also the flight of Halley’s Comet across the sky as a portent of disaster for Harold’s endeavor. 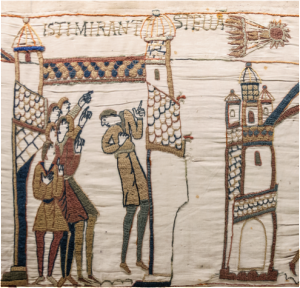 This raises the question of who commissioned the Tapestry, because if it was William’s half-brother Bishop Odo, as is often suggested, then it also puts the Saxons in a favorable light.

Who was the audience for the Tapestry and who decided to include subversive elements that subtly undermine the triumph of William’s military achievement? 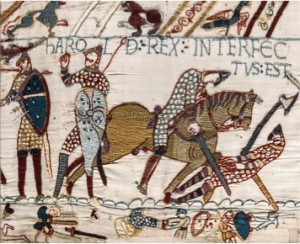 Considering the various audiences and actors in the years following the Battle of Hastings, the Tapestry proves to be a complex mix of historical fact, narrative license and, perhaps, political propaganda.

The Bayeux Tapestry: Visual Sources from the Near East to the Far North

Detail from Trajan’s Column in Rome

The Bayeux Tapestry is often described as a sort of medieval comic book, but, in fact, it shows a narrative type called “continuous narrative,” meaning that the story flows from one event to another with very few framing devices. It resembles the modern medium of film more than it does a comic book.

The most famous instance of “continuous narrative” being used in a monumental work of art can be found on the Trajan’s Column in Rome. Here, the events of the Roman Emperor Trajan’s defeat of the Dacians in the 2nd century AD are described in a 625-foot long carved relief that winds around the column showing over 2500 figures engaged in the everyday activities of the Roman soldiers as well as the numerous battles that brought victory to the Romans.

A clear inspiration for the Tapestry, this tells us that the artists who made the Tapestry took their sources from as far away as Rome, and even Byzantium, as can be seen in the heraldic decorations, or from Scandinavian metalwork and wood carvings, evident in much of the abstract patterning and border devices.

By looking at various artistic borrowings in the Tapestry, we can gain a deeper understanding of the incredibly rich visual culture that converged in this one artifact through trade and conquest.

The Bayeux Tapestry in History: from Victorian Romanticism to Nazi War loot 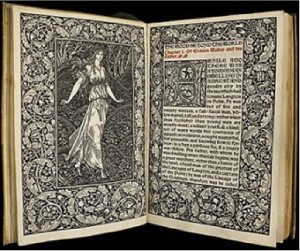 William Morris’ passion for the Middle Ages was evident in his work, including the illustration for his fantasy novel, The Wood beyond the World (1894)

Art objects don’t just exist in one moment in time. The reactions and appropriations of later generations and civilizations can tell us much about our own, more recent, histories.

It is first recorded as hanging in the Cathedral of Bayeux in 1476, but most art historians agree that it was probably originally meant to hang in a banquet hall. By understanding the Tapestry through the lens of “reception theory” we can see how Victorian writers and artists used it to create their own nineteenth century sense of nationhood and history. 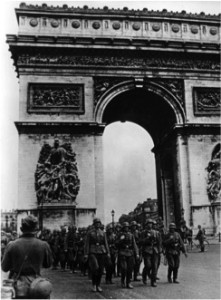 The Nazis, on the other hand, were highly invested in acquiring, preserving and documenting it in order to support their own narrative of Arian superiority, which they associated with a Viking past through the lens of the Normans (or Norsemen), who were, after all, Vikings with a French veneer.

Textiles are incredibly delicate and rarely survive as long as the Bayeux Tapestry. Its survival for over a millennium is a testament to the importance it has held for the self-fashioning of identity for English, French, German, and now, American, audiences.

1077: Bayeux Cathedral was formally consecrated. The tapestry was probably commissioned by Odo, Bishop of Bayeux, to hang in the nave of the cathedral. Why Bayeux? Harold swore fealty to William on the scared relics of Bayeux, an oath Harold would soon break.

1476: The Tapestry was mentioned in the Inventory of the Cathedral Treasures. At the time, it was displayed every year on Feast Day of Relics, a reminder of Harold’s treachery.

1794: The Arts Council for the district of Bayeux seizes the tapestry to protect it as a national treasure.

1804: Napoleon takes the tapestry to be displayed Paris while planning his (failed) invasion of England, but he returns it when his plans fall apart.

1870: The Tapestry is hidden away when its safety is once again threatened by military conflict during the Franco-Prussian war.

1913: With the official separation of church and state in France, the Tapestry is installed in the Hotel du Doyen in Bayeux, the former palace of the local bishop.

1939: The Tapestry is examined and photographed by German art historians and conservators as part of a push by Nazis to appropriate it as propaganda for their vision of a victorious “Nordic race.”

1944: The Gestapo removes the Tapestry in preparation for shipment to Germany, probably Berlin, but at the last minute the liberation of Paris by the Allies stops their plans.

Since 1983: The Tapestry has been exhibited in the former seminary, now Bayeux Museum.

The long life of the Bayeux Tapestry: Echoes in popular culture 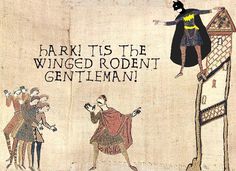 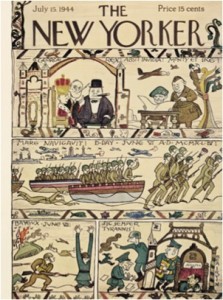