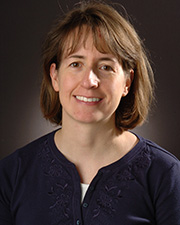 Dr. Kurtz is trained as a physiologist and immunologist.  She also works extensively with cell protein biology of animal systems.  The courses taught reflect these areas.

My research program involves studies of the physiology of hibernation, using the 13-lined ground squirrel (Ictidomys tridecemlineatus) as a model organism.  We are particularly interested in the mucosal immunology of hibernators.  Mucosal immunology is a specific branch of immunology that deals with immune responses at those sites of the body exposed to the outside world and separated from it by a single layer (or at most a few layers) of epithelial cells.  These sites are exposed to a number of “non-self” antigens, including commensal microbes, food antigens and pollen.  Mucosal sites of the body include the gastrointestinal tract (the largest mucosal site), the respiratory tract and the urogenital tract.  Immunity at mucosal sites is different than in the blood and systemic organs in that it mainly involves tolerant, suppressive responses rather than inflammatory ones.  The leukocytes of mucosal sites must be tolerant against harmless or commensal antigens while maintaining the ability to respond to pathogens that may infect the tissue. We examine this aspect of immunology in hibernators because dramatic differences are seen in the immune populations of these regions (Kurtz & Carey, 2007; Bohr et al., 2014).  During hibernation, the number of circulating immune cells is dramatically decreased but the number of immune cells in mucosal sites, particularly the gastrointestinal tract, increases.  The reason for this change is unknown, but studies have suggested an increased permeability in the mucosal epithelium of hibernators suggesting that more microbes or their products may be entering sterile tissue.  Despite this, the mucosal sites of hibernators show no signs of inflammatory disease.  Along with this, we examine the microbial populations of these animals, in collaboration with Dr. Khrystyne Duddleston at the University of Alaska Anchorage.

Currently, our lab is involved in a project with Dr. Duddleston focused on the role of the immune system in seasonal fattening in hibernators.  Hibernators live off of their fat stores during their long winter hibernation.  To do this, they must rapidly accumulate fat mass in the form of white adipose tissue (WAT, i.e., fat) during their active season (spring to fall).  This rapid accumulation of fat has been speculated to mirror that of human obesity.  Our project aims to examine this possibility and to determine if manipulations of the gut microbiota and/or immune system can curb this fat accumulation.  To do this, we examine the body mass, caloric intake and immune state of adipose tissue and other metabolic tissues (liver, muscle, etc.) throughout the fattening season.