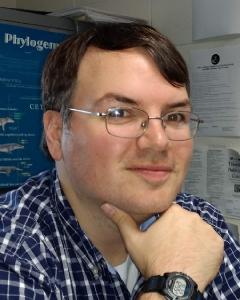 Marine environments are food-rich and provide a way for land-dwelling animals to escape competition with terrestrial predators. However, the invasion of aquatic environments necessitates dramatic changes in locomotion, thermoregulation, and reproduction for terrestrial organisms. Despite the challenges oceanic environments create for terrestrial animals, over the last 250 million years, a variety of organisms have invaded marine habitats. These secondarily aquatic animals include such disparate organisms as ichthyosaurs, plesiosaurs, sea turtles, whales, seals, and penguins. 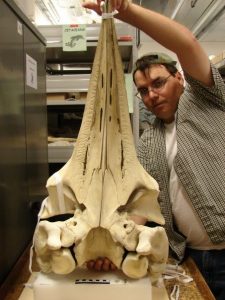 My primary research focus in our lab is exploration of the ecological and morphological changes associated with the transition from terrestrial to aquatic environments. By comparing the anatomy, behavior, and ecological changes that different organisms use to adapt to aquatic environments, new insights can be made on the factors that allow terrestrial animals to invade marine environments and development of key morphological innovations that lead to adaptive radiations within aquatic tetrapods.

The main study organisms we work on in my lab are marine mammals, in particular pinnipeds (seals, sea lions, and walruses) and cetaceans (whales). Pinnipeds are unique among marine mammals in that, unlike sea cows or whales, they must still return to aerial environments for reproduction and molting. Understanding the reasons why pinnipeds still maintain terrestrial breeding when other marine mammals have become fully adapted for aquatic reproduction may provide us information on biological constraints to aquatic adaptations and the influences of oceanic productivity and climate on the land-to-sea transition.

In contrast, whales are fully marine, with the largest diversity of any marine mammal group. This diversity has been enhanced by a suite of unique ecological and morphological adaptations that allow whales to exploit marine environments, ranging from specialized filter feeding in baleen whales (Mysticeti) to echolocation in toothed whales (Odontoceti). Whales have an excellent fossil record making them icons of evolution, and my research on whales focuses on examining how there morphology over time has adapted to an aquatic lifestyle, and how changes in morphology influence diversity and evolution in the group.

Research in my lab has three main focus areas:

To understand the evolutionary adaptations marine mammals develop to an aquatic environment, knowledge of the evolutionary relationships of different species to one another is needed. A major part of the research performed in my lab is interpreting the phylogenetic relationships of marine mammals, using anatomic and combined evidence approaches within a cladistic framework, as well as incorporating data from the fossil record. Past research has focused on interpreting the phylogeny of right whales (Mysticeti: Balaenidae), and current ongoing research is focused on the phylogeny of Pinnipedia.

In transitioning to aquatic environments, mammals had to undergo dramatic changes in morphology. Research in my lab chronicles the record of these changes and how they have influenced the diversity and ecology of these animals through time. Much of this research incorporates morphometric analyses of measurement and landmark data, to determine the principal sources of variation in morphology, as well as identify the functional and ecological significance of this variation. Ongoing research on functional anatomy includes tracking changes in hearing ability and brain size during the Oligocene transition in whales, the evolution of cranial telescoping and the influence it has had on modularity of the cetacean skull, changes in forelimb structure in early whales, and evolution of dentition in whales and seals.

Reconstructing changes in ecology is critical in understanding the evolution of aquatic tetrapods. Our lab employs a variety of approaches to reconstruct the paleoecology of fossil organisms, integrating traditional morphological proxies for diet or behavior with stable isotope analysis and morphometrics. Current ongoing research is focused on examining the utility of whale bullae in stable isotope analysis, stable isotope ecology of Alaskan pinnipeds, and the utility of dental morphometrics to identify diet.

Boessenecker, R.W. and Churchill, M. 2018. The last of the desmatophocid seals: a new species of Allodesmus from the upper Miocene of Washington, USA. Zoological Journal of the Linnean Society. XX:1-25.

Boessenecker, R.W., and Churchill, M. 2013. A reevaluation of the morphology, paleoecology, and phylogenetic relationships of the enigmatic walrus Pelagiarctos. PLOS One 8(1):e54311.

Berta, A., and Churchill, M. 2011. Pinniped taxonomy: review of the evidence used for description of currently recognized species and subspecies. Mammal Review. 42:207-234.