Hello, everyone, and thank you for visiting my webpage. I am a plant biologist with an emphasis on the organismal level. Though I am now retired, I still pursue scholarly research in my area of expertise, curate the University Herbarium, and try to make myself useful to the community at large. 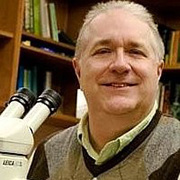 As an undergraduate botany major at Iowa State University, I was an active member of Botany Club (elected president my senior year) and a student employee in the greenhouse and herbarium. I received my  B.S. in July 1977. I also got an early introduction to research, beginning field studies that would eventually develop into my Master’s thesis.

After two years in the workforce, I returned to school to undertake post-graduate studies. In July 1981, I earned an M.A. in Biology from the University of Northern Iowa. My thesis was entitled “The Vascular Flora of Des Moines County, Iowa” [Proc. Iowa Acad. Science 90: 55‑71 (1983)] and was directed by the late Dr. Lawrence J. Eilers. While at Northern Iowa, I was employed as an herbarium assistant one year and held a teaching assistantship in the general biology labs the next.

In January 1982, I began doctoral studies under Dr. Tod F. Stuessy in his lab at The Ohio State University. During my time there, I held a variety of teaching and research assistantships, made three research trips to the Hawaiian Islands and one to herbaria in Europe, and accompanied Dr. Stuessy on an expedition to the Juan Fernandez Islands. I received my Ph.D. in botany in September 1988; my dissertation was “Systematics and Evolution of the Endemic Hawaiian Genus Clermontia Gaudichaud” (Campanulaceae: Lobelioideae) [Syst. Bot. Monogr. 32: 1-94 (1991)].

My first professional position after graduation was a two-year term appointment as a visiting assistant professor in the department of botany at Miami University in Ohio. Here, I taught a variety of botanical courses. From there, I accepted a position as an assistant curator in the department of botany at the Field Museum of Natural History in Chicago. Though this was a research position, I also taught courses on six occasions at the University of Chicago, the University of Illinois-Chicago, and College of DuPage. During these years, I made research trips to Chile, Taiwan, and the Hawaiian Islands, and accompanied educational tours to the Amazon and France. In July 1999, I came to Oshkosh, where I taught various classes until my retirement in August 2017.

My area of expertise within biology is systematics, which deals with classification, naming, evolution and biogeography. For the past three decades, a single family of flowering plants has been the focus of my interest. The Campanulaceae includes 84 genera (including Campanula and Lobelia) and over 2300 species, with representatives on six continents and many of the world’s islands. Since 1986, I have published over 70 peer‑reviewed articles on this family in a wide variety of scholarly journals and books. A list of them all will be found here.

Two publications from 2007 are particularly noteworthy. The first was my treatment of Campanulaceae for The Families and Genera of Vascular Plants, edited by Klaus Kubitzki. The goal of this encyclopedic multi-volume work is to provide a comprehensive taxonomic treatment to the level of genus for all of the world’s ferns, fern allies, and seed plants. The Campanulaceae treatment provides keys and descriptions for all 84 genera, as well detailed information on the morphology, anatomy, embryology, palynology, reproductive biology, phytochemistry, ecology, biogeography, paleobotany, classification and economic value of the family.

Shortly after this volume appeared, the Royal Botanical Gardens at Kew, England, published my book, World Checklist and Bibliography of Campanulaceae. This monograph is a complete accounting of all 2300+ species of the family, with full data on classification, nomenclature, geographic distribution, life form, and synonymy, together with an exhaustive bibliography. These two works, taken together, represent the closest approach to a complete monograph of the family to have been published since 1839.

After these works appeared, I was invited to participate in writing the treatment of Campanulaceae for the Flora of China. An undergraduate biology major, Laura Klein took part in this research. Together, we spent two months working on the manuscript at project headquarters. This research experience proved invaluable to the student, who is now pursuing a graduate degree in botany at Miami University.

Recently, I was humbled to learn that a new species of plant from New Guinea had been named in my honor: Ardisia Lammersiana.

Recently, I have begun to try my hand at a very different sort of writing. I am experimenting with writing historical fiction that draws heavily on my knowledge of botany, science, and nature. See here for more information.