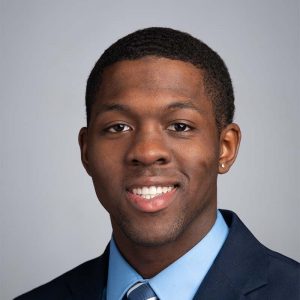 Meet Alex Paasewe, a senior at UW Oshkosh who will be graduating in May 2022 with a double major in accounting and finance. Throughout his time at UWO, Alex has been a member of the Black Student Union since 2017 and has served as the Multicultural Education Coalition representative, vice president and treasurer of the organization. He has also been a member of the Multicultural Education Coalition since 2017. During his first two years on campus, Alex worked as a Community Advisor for South Scott and took on a liaison position to help educate other CAs on racial issues and similar topics. “Being a CA forced me to help foster a community environment, so going into that role really helped improve my communication and leadership skills,” Alex said. “Going into corporate America, where relationships are almost everything, I knew that was something I really had to get better at, and the CA role definitely helped.”

In March 2020, Alex was selected to present his research on the effects of institutional discrimination at the National Council of Black Studies Conference in Atlanta, Georgia. “We had to audition in front of the director for Black Studies and eight students were selected to present their research on a national stage,” he said. “My research was titled, ‘In the Eye of the Storm: The Peril of Black America and The Residual Effects of Institutional Discrimination Today.’” Alex has also participated in the Student Management Endowment Fund at UWO in spring 2020 and will participate again in fall 2021.

During his time at UWO, Alex has been an intern for three companies: Church Mutual Insurance Company (May-August 2019),Goldman Sachs (June-August 2020) and Ernst & Young (January-March 2021). “Each of those internships taught me something, but most of all it definitely gave me confidence that I can do this in the real world, not just in school,” he said. Alex will be interning for Goldman Sachs again in summer 2021 and received an extended full-time offer with Ernst & Young. “I know Goldman Sachs doesn’t really recruit in the North for some reason, but I took a leap of faith and submitted my application anyways and thankfully they responded back for an interview,” he said. “If I didn’t have confidence in myself to take that leap of faith knowing that yes, I can work for a Fortune 500 company, I wouldn’t have had that opportunity.”

Alex said he especially benefited from Business 240, a professional skills course that introduced him to valuable resources and taught him useful skills provided by the Career & Professional Development office. Some resources he utilized include networking opportunities like career fairs and learning how to optimize his LinkedIn profile. “We had like a whole session with LinkedIn, and I think that definitely helped elevate my profile to get more clicks or messages from recruiters,” Alex said.

Alex said in five years he sees himself living in Dallas and working at a public accounting firm as a manager or other leadership position. Three pieces of advice he would give to other students is to always be confident in yourself, get involved and network. “A lot of people go through school just to go to class and leave right after, but college is way more than that,” Alex said. “You want to go to college to get stuff out of it and getting involved is a way to do that. Join an organization and network with people because, as many people say, it’s not about what you know, it’s about who you know.”

Congratulations, Alex, on all of your accomplishments! We wish you the best of luck moving forward!