I write today to announce that, after 30 years of service to the University of Wisconsin Oshkosh, Provost and Vice Chancellor for Academic Affairs Lane Earns will be retiring, effective August 30. He is a colleague and friend whose distinguished record of administrative service and teaching have been transformative for this university and whose research continues to inform his field of Japanese history. 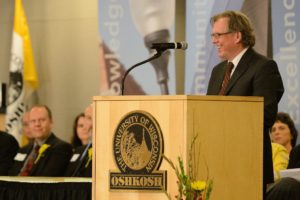 It goes without saying that I will greatly miss Lane’s thoughtful counsel, institutional knowledge, and effective academic leadership at UW Oshkosh. He has provided calm and steady support through years of university growth and change, including the transition to my leadership as chancellor. I have deep respect, however, for his decision to follow his spouse, UW Oshkosh College of Letters and Science Associate Dean and faculty member Franca Barricelli in her new position as Dean of Arts and Sciences at Fitchburg State University in Massachusetts. I hope you will join me in celebrating these two gifted and giving members of our university community.

UW Oshkosh is a stronger institution for Lane’s contributions. These include his years of classroom teaching, research and faculty service, for which he was recognized with the university’s highest honor, the John McNaughton Rosebush award. Administratively, Lane has led the division of Academic Affairs as Provost for 13 years and also served 2 years as Associate Vice Chancellor in the same division. His leadership was especially influential in the development of our nationally acclaimed University Studies Program.

Beyond UW Oshkosh, Lane served as interim chancellor at the University of Wisconsin-Parkside, where he led that campus through its first-ever strategic plan, before leading our own strategic planning process this past year. At UW System, he was among the earliest and most steadfast advocates for liberal education through LEAP and other national initiatives. 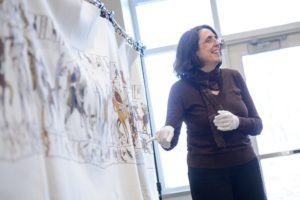 Lane has always put the best interests and the long-term prosperity of the UW Oshkosh community first, and it has personally been a pleasure and a privilege to serve with him. Today, I ask you to join me in acknowledging Lane’s long and distinguished service to UW Oshkosh, the UW System and the state of Wisconsin.

I will soon begin the work to identify an interim Provost and Vice Chancellor for Academic Affairs, followed by a national search for the position in the coming year. I pledge to keep the campus community informed about each process. As with all of our vice chancellor searches, there will be many opportunities for members of the University to be involved.