UW Oshkosh’s College of Business provides numerous opportunities for students to get involved outside of the classroom. The college offers several business-focused student organizations. Students of all majors are invited to join any of these organizations.

College of Business Admission Requirement
To verify club attendance, print off the club attendance verification form below. When the form is completed, scan the form and add the electronic version to your Professional Development Portfolio. Be sure to follow the directions on the form correctly.

Learn about our current student organizations by expanding the tabs.

Activities include speeches and panel discussions by students, faculty and professionals; field trips; business meetings; and a wide variety of professional, social and service activities. Beta Alpha Psi activities are open to all students.
Titan Connection Page
E-mail the club

IMA’s goals are to help members develop both personally and professionally, by means of education, certification and association with other business professionals.

As a respected leader within the global financial community, IMA influences the concepts and ethical practices in management, accounting and financial management. Its ethical standards provide guidance to practitioners for maintaining the highest levels of ethical conduct.

The UWO Chapter of Beta Gamma Sigma – The International Business Honor Society recognizes business students with high scholastic achievement. Members gain access to all of the resources that Beta Gamma Sigma provides, including networking opportunities, professional development programs, and other benefits that enhance members’ educational and career aspirations as both students and young professionals. Student members are recognized with certificates and an honor cord at an annual Beta Gamma Sigma ceremony.

Need help deciding if that honor society invitation email you received is legitimate? Interested in organizations specific to your major or interest area? Use the search tool on the Association of College Honor Societies website. BGS is featured!

The Collegiate Entrepreneurs’ Organization (CEO) at UW Oshkosh informs, supports, and inspires students to be entrepreneurial and seek opportunity through enterprise creation. In addition to providing a peer support system for students interested in entrepreneurship, CEO provides opportunities in networking, leadership development, and hands-on experience.
UWO CEO welcomes all students, both undergraduate and graduate, regardless of their major. We believe that by mixing brilliant minds from many disciplines, creativity and resourcefulness can be brought to new heights. CEO members are motivated, energetic and intelligent students who want to surround themselves with other individuals who want to learn about the world of entrepreneurship and the possibilities it holds.
Titan Connection Page
President: Maddie Lemieux
Faculty Advisor: Dan Brosman
To stay up to date with CEO, please visit our web page on Presence.

Cybersecurity club is open to all students to learn more about the growing field. We will bring in speakers, take tours of different companies in the Midwest, and do some fun activities! Whether you have a lot of experience or are just interested in learning more about the field, we would love to meet you!

The Economics Student Association is an organization on campus focused on bringing together students who are interested in the field of Economics with faculty and professionals To provide economics students with supplemental educational, networking, and professional development opportunities, and to promote interest in and understanding of economic science. Additionally, we represent the interests of economics students in the Student Assembly, and the College of Business Student Advisory Council.

Affiliated with the Financial Management Association, the UW Oshkosh Finance Club provides opportunities for its members to interact with business professionals and to explore career opportunities in finance.

Not true!  In fact most programmers will only need to know how to add, subtract, multiply, and divide.  Programming demands the use of logic more than anything.  When I say logic, I really mean the use of logical operators like: “IF”, “THEN”, “ELSE”, “AND”, “OR”, and “NOT.”

Not true!  Even if you don’t want to become a programmer, you will likely be working with them at some point.  In order for you to work with programmers, it is important to understand the nature of programming and the setbacks that can occur.  Estimating time and resources is a big part of any job.  Estimates in the computer realm are notorious for being completely off target because simple tasks that sound easy in thought and on paper can suffer days, months, and even years of setbacks.

Interactive Web Management Club is a student organization used to to help members become more familiar with the possibilities an IWM major can provide. This major blends facets of business, technology, and media creation in the web and technology fields. IWM graduates are technologically savvy and know how to leverage the best online practices, including social media, to give their employers a competitive edge in the marketplace or start their own high-technology businesses. Join today and gain valuable knowledge in the field, hear from experienced professionals in a broad range of topics, and make connections to help further your education and career!

PLEASE FOLLOW US ON INSTAGRAM! This will also provide you with more up to date information on club events and reminders: @UWO_IWM

UWO Marketing & Sales Club is a student organization that works to make its members more familiar with marketing and sales practices. The student club is the collegiate chapter of SMP. Besides exposing its members to marketing practices, our club helps create networking opportunities for the members by bringing in local marketing and sales professionals. Our main goal is to educate, inform, and grow as aspiring Marketing & Sales professionals.

Find us on Facebook at UWO Marketing & Sales Club – All event information will be posted there as reminders!

Feel free to contact our advisor or any of the club officers for more information about signing up!

The National Society for Human Resource Management. SHRM is the world’s largest association dedicated to Human Resources Management with over 170,000 professional members and 55,000 student members. We are proud to be UW Oshkosh’s student chapter and affiliated with SHRM and sponsored by the local Fox Valley and Oshkosh Area Chapters of SHRM.

UWO SHRM will, in accordance with the National SHRM Code of Ethics:

To be recognized by the University of Wisconsin System, our sponsoring chapter Fox Valley SHRM, other local SHRM chapters, and HR professionals throughout the state as the most active and prestigious student business organization in Wisconsin.

We hope that you enjoy the numerous resources that we have available to you on our UWO SHRM club website. Please feel free to contact any one of us with questions that you may have about UWO SHRM, the Human Resources major, and more.

UW Oshkosh APICS members participate in a variety of professional, social and community service activities. Students work closely with their “parent chapter” in the Fox Valley, an organization of over 400 professionals. Through trips to local organizations and businesses that include presentations and facilities tours, students are given the opportunity to further investigate and refine their interest in the field of Supply Chain Management.  In addition to providing funds for scholarships, paper competitions and other activities, the parent chapter provides valuable networking opportunities which may lead to internships and, upon graduation, employment. Supply Chain Club activities are open to all students. 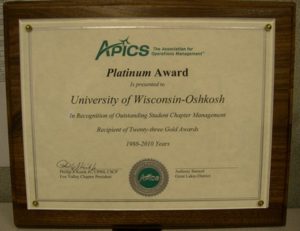 Risk management and insurance – we all deal with it daily, but few actually understand it! Join us to gain a better perspective of this international, multi-billion dollar industry and the myriad of opportunities that it offers, even locally. Students can connect with those in the industry to get a deeper understanding, potentially leading to job shadows and even internship opportunities!