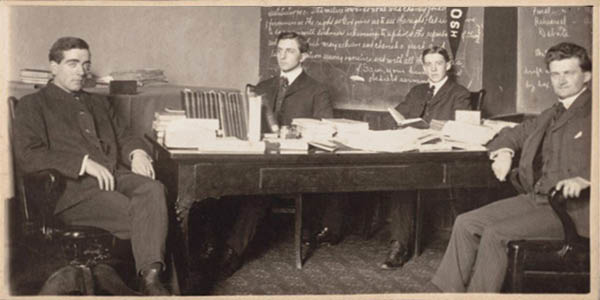 From the Archives
By
engage
0 Comments
0
1276 Views

Oshkosh Orators: Students Earl McDougal, Charles Velte, Forest Sorenson and Chris Rupp, from the left, all members of the Oshkosh Normal Oratorical Association, prepare for an April 1905 debate against the Milwaukee Normal School. The Oshkosh team returned victorious, having successfully argued against the federal ownership and control of railroads. Debating was an important part of Normal School life in the 19th and early 20th centuries.

Check out more photographs From the Archives.

More Parallels with the Past: Graduates Employed

Parallels with the Past