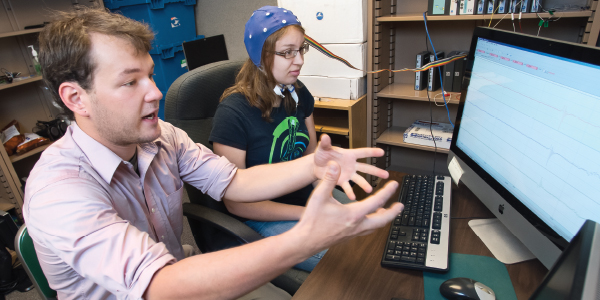 How fast, and how far, can the brain “go?” Those are the questions Anthony Drew seeks answers to.

The University of Wisconsin Oshkosh graduate student pursuing a master’s degree in cognitive affective psychology, uses electroencephalography (EEG) technology on campus to track and measure the electrical activity produced by the brain and drive his research exploring the processing power and thresholds of the human mind.

“What I’m finding is the more information you have packaged together in little temporal packets—episodes—the better you are at encoding that as opposed to things spread out evenly over time,” said Drew, whose goal is to eventually pursue a doctorate and professorship.

While UW Oshkosh isn’t a “research institution” by its formal definition, students in multiple disciplines on and off campus are pursuing research galore. And, in some cases, the research involves some pretty deep, forward-looking hard science.

Enter Drew. The practical ramifications of his and similar researchers’ work could lead to some remarkable discoveries and advancements for humankind, he said. It’s possible a greater understanding of the human brain’s processes and limits could help create artificially intelligent machines or answer questions that have long vexed educators, such as “Can attention deficit disorders in an educational setting be treated with some basic strategies?”

“For example, ‘Is dyslexia an attention disorder, and, if so, is there a strategy you could use to capitalize on the correct interpretation of words as opposed to the jumbling of things that’s associated with dyslexia?’” Drew said.

“It’s amazing to me how quickly the brain is able to absorb everything around you and then how little of that you actually have access to as a conscious person,” he said. “I’d like to explore that a little further.”

Hear Drew explain more about his research into the limits and potential of the human brain.

The heart of a champion

Profiles
0 Comments
The University of Wisconsin Oshkosh — Where Excellence and Opportunity Meet.