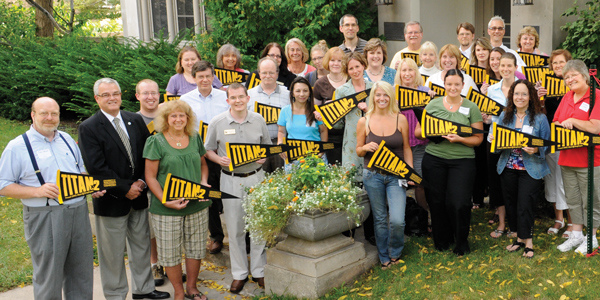 Nearly 400 current University of Wisconsin Oshkosh employees have exchanged their backpacks for briefcases and returned to their alma mater to work.

Gantner and Chancellor Richard H. Wells offered their gratitude to alumni-employees during a reception held at Pollock Alumni House in September. The event included a drawing for prizes and a presentation of Titan pennants to help alumni-employees show their pride.

When Dettlaff graduated from high school, she wasn’t sure what she wanted to do next. She began working at UWO in 1987 and was soon encouraged to further her education. She worked full-time and took weekend classes, earning a bachelor’s degree in liberal studies in 2001 and a master’s degree in experimental psychology in 2003.

As a grad student, Dettlaff had the opportunity to study black howler monkeys in Belize and quickly fell in love with the threatened species. She continues to use her vacation time to take part in study trips.

“Working here has afforded me more opportunities than I could ever imagine,” Dettlaff said.

Opportunities for professional growth and excellent mentors have kept Lori (Vanderheyden) Worm ’84, at UW Oshkosh. Her first position was as a student worker in the parking office, which she started the summer before her freshman year.

For three decades, she has worked her way up to her current position as associate vice chancellor for administrative services.

“I’ve never been bored, and I’ve never left this place,” she said. “Life got busy, and time just flew by.”

In her work with the University’s budget, Worm enjoys looking at the big picture and finding ways to help the institution do more with less. “I like to help demystify the budget so people can understand it.”

Having grown up in Oshkosh, Theatre Department Chair Roy Hoglund ’76, attended UW Oshkosh as an undergraduate for very practical geographic and financial reasons. In addition, his mother was working on her bachelor’s degree in English at the same time.

Hoglund said he took “the back door into theatre,” when his interest in tap dancing led him to audition for a role in a musical production.

The family connections continued on campus, as he met his wife, Paula (Stevenson) Hoglund ’77, and they were married at Pollock Alumni House in June 1977.

The young couple next landed far from their Wisconsin roots in Seattle, where Roy attended graduate school in scenic and lighting design at the University of Washington, and in Albuquerque, where he served on the theatre faculty.

In 1986, they were drawn back to their family and to UWO, where Roy looked forward to pursuing theatre in a collaborative environment. “Our program encourages a liberal arts approach to theatre that considers different creative outlooks,” he said.

“As a first-generation college student, I had no clue about where I should go to college,” said Abhold, UWO Counseling Center director and interim Dean of Students. “I didn’t get any advice, except from my high school guidance counselor, who said that UWO was big enough for me to find what I wanted, but not so big that I would get lost.”

From his first day on campus, Abhold got involved with residence hall programs and working as a student janitor and beverage runner at Elmwood Commons.

He later applied for and landed a community adviser position. As an assistant residence hall director at the time, Kwaterski was the one to interview Abhold for the job. The two didn’t start dating, however, until a couple of years later. They married in 1991.

“The rest is history,” said Kwaterski, assistant to the vice chancellor of Student Affairs. “We have a lot of great memories, especially of working in the residence halls.”

The two left Wisconsin to live, work and further their education in three different states before returning to UWO in 1999.

Their residence life experiences have provided an excellent perspective for working with students today, Kwaterski said.

“Being that involved with college students has transformed my life and informed all of my professional choices since then,” Abhold said.

“I feel like I have a connection to the cities, small towns and rural areas that our students come from. I still remember how scary and exciting it was to come to college, and I want to help other students harness and direct those feelings for their own success.”

Are you a UWO employee who also is an alum?
If you haven’t had the opportunity to pick up your free Titan X2 pennant, e-mail the Alumni Office to pick one up today. 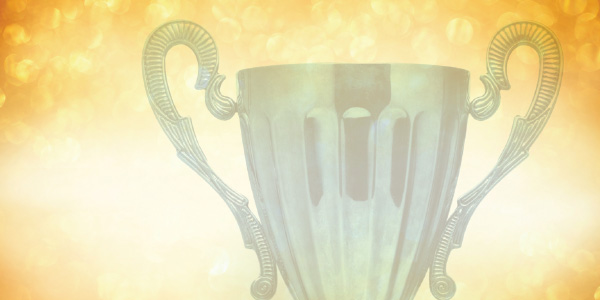 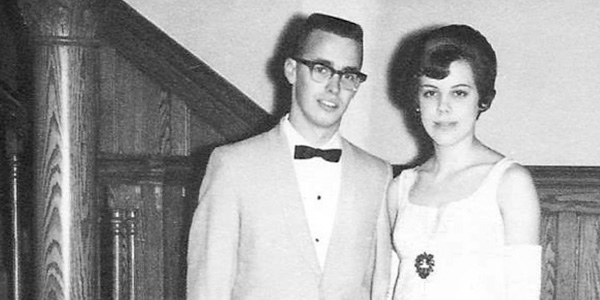