A University of Wisconsin Oshkosh student who aspires to be a college professor is thrilled with the release of Vol. 11 of Oshkosh Scholar—a journal that features student research.

Jennifer Depew, a native of Appleton who is double-majoring in history and political science, is among the six whose work is being published.

A junior at UW Oshkosh, Depew endured a rigorous process of review and editing after submitting an abstract of her research on former President Woodrow Wilson. The work originated as a paper for a class on the U.S. presidency.  “A New Slavery of Caste”: An Evaluation of President Woodrow Wilson with Regard to Race explores the presidency of Wilson and the  development of criteria for evaluating his presidency.

Depew concluded that Wilson was significantly lacking in his consideration of African-American rights.  “It was difficult, but incredibly rewarding,” Depew said about the process of being accepted  for publication in the journal. “It was one of the best experiences in my undergraduate career.”

Her 26-page research paper needed to be trimmed to the 20-page maximum allowed for submission. It was difficult to reduce passages when it would have been easier to expand them. She submitted the research by the June 1 deadline and heard by mid-July that it was being considered.

Then, she met with faculty to work on ways to improve the work. The paper was re-submitted in mid-August.

She recalled the moment she read an email stating that she would be part of Oshkosh Scholar. Excited, but needing to stay focused at her student job, she eventually texted her parents to tell them the news.

“I want to become a professor but the job market is abysmal,” Depew said. “You have to be really competitive. Part of that is going to a good graduate program, and this paper being published is going to be great for the application process.”

Each year, Oshkosh Scholar includes articles from a combination of different disciplines.

Students featured in Vol. 11 are Depew; Milwaukee native Taylor Schumitsch-Jewell ’16, psychology, who considers the impact of bystander intervention training on a college campus; Charlotte Kanyuh ’16, criminal justice and political science, also of Milwaukee, who investigated attitudes toward academics and alcohol consumption; Carly Persson ’16, sociology and environmental studies of Hewitt, who looked at the motivation of farmers and restaurant owners to participate in a local food movement; Fond du Lac native Taylor Jones, a senior with quantitative economics and Spanish majors who investigates the effects of the Affordable Care Act on states’ numbers of uninsured; and Oshkosh native Ashley Foster ’16, political science and Spanish, who studied an economic comparison of post-communist states to others in Europe.

The WiSys Technology Foundation-sponsored event took place within Reeve Memorial Union. It included an art display, performances, student research, Oshkosh Scholar cover poster submissions and a “quick pitch” competition for students. Given one minute to sell their research, the “quick pitch” is similar to an “elevator pitch” well-known to job-seekers who attempt to sell themselves in a very short talk to potential employers.

The research submission and selection process for Oshkosh Scholar is lengthy and rigorous.  “It’s good for UW Oshkosh students—it really mimics the editorial process of academic journals,” Kercher said. “It really pushes students to do their best.”  Though much of society has gone digital, Kercher is a big fan of the printed product.  “There is nothing like having your work show up in print. It’s a great symbol of your hard work and very satisfying,” he said.

A campus collaboration
Design students in Associate Professor Karina Cutler-Lake’s class each are directed to create possible cover designs for the Oshkosh Scholar journal. They include an artist’s statement that may reflect their inspiration, materials used, how the design is relevant to research or their vision for the piece. Designs must be broad in scope, applying to all research disciplines. Cutler-Lake’s classes currently are designing the 2018 cover.

The experience is another that mimics real-life, with students coming to understand what it’s like to have a client who needs designs under a deadline.  The cover image for the 2017 journal was created by Design II student, Fond du Lac native Seth Pahmeier, a junior majoring in fine arts.

“All the notes taken and research conducted prior to writing is represented by the diagonal pencil that twists upward on the front to signify the final product—a scholarly paper. Vintage/1970s colors were chosen to illustrate the idea of going back to the classics and writing by hand.” 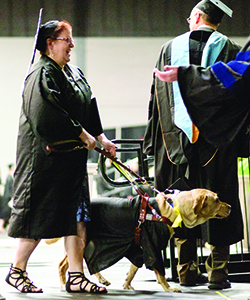