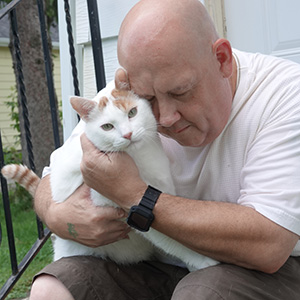 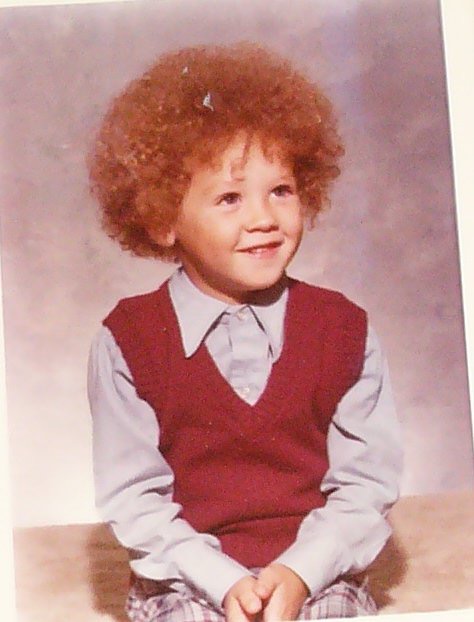 Chris Kessler at age 5, a year before he was introduced to drugs and alcohol.

At 6 years old, most children are experiencing a lot of firsts, whether it’s their first time losing a tooth, their first grade on an assignment, or their first sleepover. For Chris Kessler, at 6 years old he had his first experience with marijuana and alcohol. “[My parents] were always partying so they’d say, ‘Look, he wants to smoke pot!’” Chris said. “They just thought it was funny, I guess.”

Chris, 50,  of Oshkosh, Wis., is a recovering alcoholic and former drug user. He has been in recovery since Jan. 21, 2013. He has been a recovery coach for the PRISM team (Peer-based Response, Information, Support, and Maintenance) in Oshkosh since 2018. The PRISM team trains recovery coaches and links them with people suffering from substance abuse disorders to help them get through the recovery process.

He currently resides in Oshkosh about a block away from Solutions Recovery Inc. which is his go-to spot to hang out with friends and spend time with others in recovery.

Todd Vander Galien, a PRISM team coordinator, said Chris has been an effective recovery coach. “Chris has been pretty successful,” Vander Galien said. “He’s had a number of tele-support relationships where it has gone on for weeks or months, to the point where a person has been able to get in and develop their own support system.”

Chris’ own journey from a hazy, drug-filled childhood in California to a life working as a screen printer in Oshkosh is one filled with pain, addiction, inspiration and hope.

The Path to Darkness

Chris’ upbringing was tumultuous, which forced him to mature long before he should have had to. He grew up in Venice, Calif., where in the early 70s, cocaine was king.

As a child, Chris was essentially given the role of a doorman while his dad and his dad’s girlfriend partied, making sure that unwanted people were kept out. Chris’ dad, Mickey, sold hard drugs like cocaine to some big time people in Los Angeles, so it was essential that only certain people be let in.

Chris also played the role of protector to his little sister, who was three years younger, as he tried to shield her from the drug use and bad characters that were constantly in the house.

“I was 10 at the time and I was raising [my dad’s] girlfriend Nancy’s two daughters, Tracy and Jessica, and then my younger sister,” Chris said calmly. “I made sure that my little sister, Tracy, and Jessica got food and always got to eat and that they did their homework and got to school.”

Chris lived with both of his parents until he was 10 years old, when they got divorced. After the divorce, Chris and his sister went to live with his mother in a small apartment in Venice.

Chris’s mother’s boyfriend at the time was abusive and one day, while he was choking Chris’ mom, Chris decided he had had enough and stabbed the man’s leg with a protractor. Chris was forced to move back in with his father because of the violent act. But the flow of drugs at his father’s house never stopped, and young Chris, once again, took on the role of the caregiver.

“I’d have to take care of him because he’d be all f—ed up,” Chris said. “Excuse my French. But he’d be all messed up and then he’d wake up and say, ‘Go to the store and get me some cookies.’ So I’d go get cookies and he’d start eating them and then pass out so I’d have to pull the food out of his mouth so he didn’t aspirate it.”

Chris was forced to move back-and-forth between his parents’ houses, which caused some instability at school. He spent a year with his father going to an alternative school in Santa Monica and then went back to Wildwood Elementary where his teachers and classmates questioned where he was for a year. 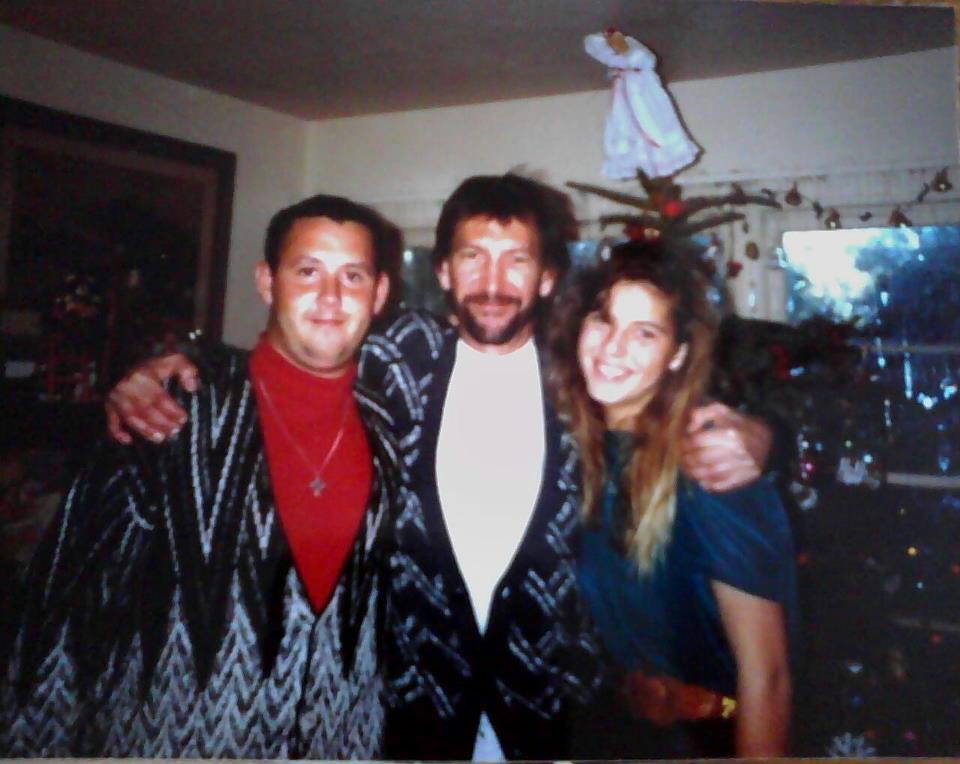 Chris, with his dad Mickey and sister, Nicole at Christmas 1989 in Malibu.

“I lied and said I went to Washington and went up there and saw raccoons,” Chris said. “So my parents went in for a teacher conference and they said, ‘No, he didn’t go to Washington.’ So I had to go in front of my whole class and tell them that I lied. That was embarrassing and it was all to cover up my mom and dad’s drug use.”

Chris, who was already drinking at age six, only saw his relationship with alcohol and drugs deepen as he went through school. “By the time I was 12, I was a full-blown alcoholic,” Chris said. “When I was in junior high, I would drink a six-pack before school.”

Chris walked into a place his friends and he dubbed the “Korea Mart,” grabbed a six pack and went to the counter. The cashier asked to see his ID because he obviously looked under age. Chris responded, “You don’t need to see my ID,” and he walked out. From then on, he was able to walk into the store and buy alcohol whenever he wanted.

Chris’ biggest addiction was alcohol but he also struggled with cocaine and experienced mental illness. Despite all the hardships Chris went through in school, he still managed to hold a high GPA throughout high school and even graduated culinary school at Johnson and Wales in Providence, Rhode Island.

After graduating from Johnson and Wales, Chris was at a crossroads. His addiction had become so powerful that he enlisted in the U.S. Army to try to set himself straight. He was deployed to Panama in 1989. He served as a medic, pulling wounded soldiers off the front lines.

“We were the Alpha-holics,” Chris said. “It was one of our first door-to-door combat situations and I was a part of that so I drank heavily.”

Chris returned home to Los Angeles, his alcoholism exacerbated by his experiences in Panama. 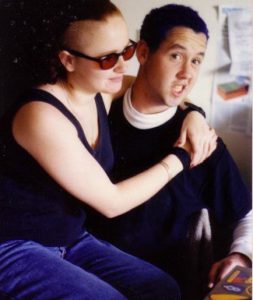 Chris, at 23, with a friend, right before he went on stage to play with “The Jolly Hoho’s,” a punk rock band based in Arcata, Calif. Chris, who plays bass, says he often played while stoned and drunk.

After moving to Colorado, Chris found himself once again relying on alcohol to get him through his daily routine.

Chris was drinking a bottle of vodka a day, feeding his addiction. His addiction even cost him a relationship and a marriage, albeit a brief one.

“I had been sober for over a year and then I went to Ukraine,” Chris said. “I met a woman online and I went to Ukraine and married her. But then I started drinking when I was over there and that was my folly.”

Chris’ marriage to the woman only lasted for six months. “I did that in Ukraine and then that became a problem but then there were also personal issues,” Chris said. “We ended up not being together. While she was waiting to come over here and all that stuff, she was like, ‘No, I can’t marry an alcoholic.’”

The debacle only heightened Chris’ issues when he got back to the United States. After living in Colorado for 15 years, he moved to Oshkosh, Wis. in 2011, where a friend lived, in hopes of getting clean.

While in Oshkosh, he learned that Wisconsin has a large bar population, making it a difficult place for alcoholics to enter the recovery process. His alcoholism got so bad that he had to go to extreme lengths to feed his addiction.

“I drank all the time,” Chris said. “I’d wake up in the middle of the night and drink. Towards the end, I couldn’t not drink. It wasn’t even enjoyable, it was just to not [detox]. So I would drink until I passed out. It was just an awful existence.”

In 2011, Chris finally had enough and was willing to end his life to be done with the pain and frustration of maintenance drinking. Chris sat on his bed and loaded a .50-caliber black powder rifle.

“I had a gun to my mouth and I was going to kill myself,” Chris said. “My cat came up to me and rubbed on my leg right when I was about to pull the trigger. That was Mr. Pooh. Pooh rubbed up against me and I had a moment of clarity for a second. I spoil my cats, 100 percent. I said, ‘The shitty thing is nobody’s going to be able to take care of you guys like I do.’ So I put the gun down. The cats knew that something was wrong because they wouldn’t leave me alone.”

Chris called a friend and begged him to come and pick up his gun and bring him to the hospital so they could keep him from drinking and more importantly, from killing himself. 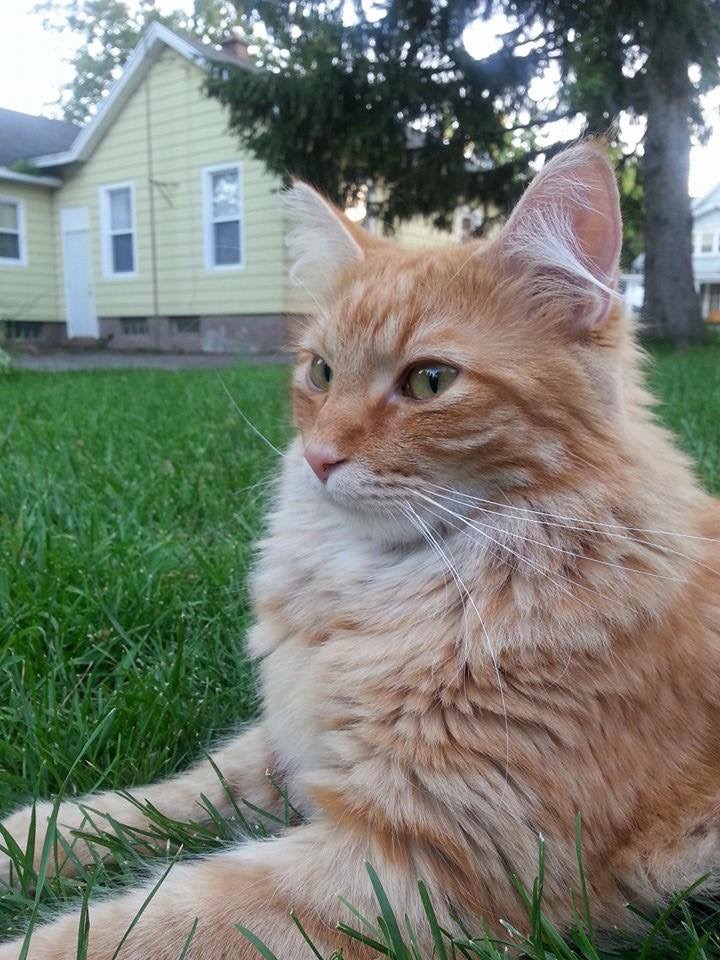 Mr. Pooh, who Chris credits with helping save his life. Pooh died in 2014 after been hit by a car.

While at the hospital, doctors tried to take Chris’ blood but his veins kept collapsing due to extreme dehydration. After going through the rigorous detox process, Chris was able to break free from his addiction and has been sober since January of 2013.

The Road to Recovery

Since that day he sat on his bed with a gun in his mouth, Chris hasn’t had a drop of alcohol. His work friends wouldn’t invite him out to work functions because they knew about his past and didn’t want to jeopardize his sobriety. He responded, “Do you guys f—ing hate me or what’s your problem? They said, ‘No, it’s just that you’re an alcoholic and we were going to drink.’ I said, ‘Yes, it’s true. The second I open that door and I see somebody with a beer, I’m going to turn into the Hulk and run and grab it out of their hands and then turn into Dr. Jekyll.’”

Today, Chris lives with his five cats, Arugula, Cremini, Fenway, Frankie and Rommel, and regularly attends meetings at Solutions Recovery, Inc. He also serves as a recovery coach to those who are going through the same process he did nearly seven years ago.

Chris has limited contact with his family but enjoys conversations with friends and heading to Solutions Recovery Inc. for coffee on mornings he doesn’t work.

Recently, Chris was diagnosed with pancreatic cancer. He is in good spirits and is not undergoing treatment as he tries to enjoy the limited time he has left with friends and family.

Chris says a key to recovery is to ask for help if you are struggling with addiction.

“No matter what your situation and where you are at in your life, there’s always hope,” Chris said. “I was there, I know, and here I am. What can I do to help you to get where you need to go because I’m right here, here’s my hand.”

Chris smiles as he opens his arms. “That’s what you’ve got to do. Some people just need a hug.”