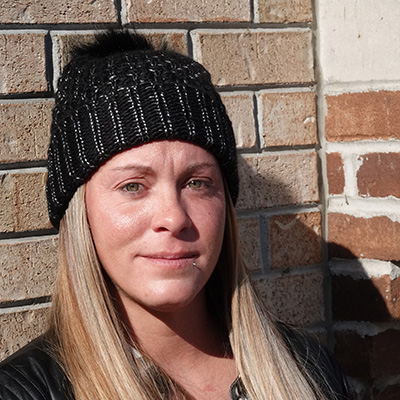 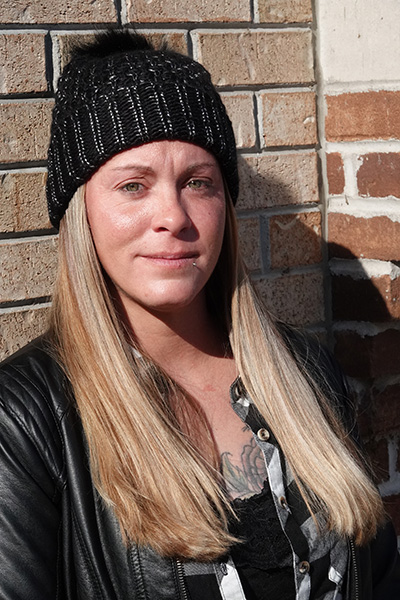 The video showed grainy black and white images of a lifeless body lying on the ground as semi-trucks and motorists passed by. White clouds of condensation blew from the officers’ mouths as they moved like skilled professionals in the frozen winter night to save a life.

The radio calls of the dispatcher and the officers talking back and forth echoing “no pulse, no pulse,” streamlined a feeling of intensity and fear into the viewer, as if you were right there watching a human-made disaster unfold.

On the night her fifth overdose almost became her last, the woman lying on the ground ⁠— Kristina Farina⁠ — only remembers how cold she was. She has no memory of the two officers administering two doses of Naloxone up her nose, effectively saving her life.

She watches the body cam video from her overdose now — two years later, two years sober, and a completely different person than the strung-out woman with no pulse lying on the pavement. She watches it to remind herself how far she has come and how far she still must go. She smiles now, pushes away the tears, and thanks her two daughters for being the constant reminder she needs to stay sober.

Kristina has been clean from her addiction to heroin, meth and alcohol since 2018 but the journey to sobriety has not been an easy one. Her addiction started in 2012. She was working construction, had been for years, and over the course of doing the hard physical labor that construction demands, she wore out the cartilage in her neck. The cartilage was so far worn that bone was touching bone. Sitting up and doing anything menial was painful for her.

Her doctor gave her a prescription for 130 oxycodone pills. It only took two months for Kristina to become addicted to those little white pills; and once the doctor stopped supplying them she had to become resourceful.

She began taking whatever drugs she could find, anything to numb the pain. She found a friend who could get her what she needed. She would travel throughout Northeast Wisconsin and down to Milwaukee looking for her next fix.

Her addiction took her away from her family who loved her — the way opioid addiction has taken tens of thousands of loved ones from their families all through the country — until the lessons she learned after that night in 2017 when she nearly died from her fifth overdose. 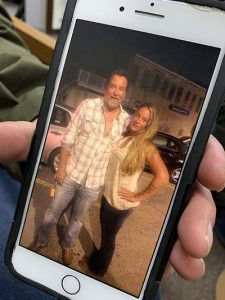 Kristina and her dad

Kristina was raised just outside of Milwaukee in Hartford, Wisconsin. Her father was a small business owner. She was the youngest of four children and had three older brothers.

In fifth grade Kristina’s parents divorced. Her father, who she describes as nurturing but protective, took custody of Kristina. Kristina was OK with moving to her father’s house. Her father was her protector and when she speaks about him she smiles from ear to ear. But soon, her father’s protective nature became overbearing.

“My father was strict,” she said, “very strict.”

So when high school came and Kristina started spending time with her mother again — going to high school one year at Oshkosh West High School and the next year at the high school in Hartford, where her father lived — she started hanging out with “stoners,” partying and doing all the things her father tried to stop her from doing.

When she turned 18 and became an adult she recognized her freedom and went off the rails with partying, drinking and doing drugs.

She quit her two jobs and became a stripper at a club in Oshkosh. She started hanging around the crowd that gathers at a strip club and was introduced to a life of cocaine, sex and violence.

Kristina needed to get out of Oshkosh. She went back to living with her father.

‘The lowest of the lows’

As the years passed, Kristina became a mother to two children. She also lost two children, one to abortion and the other “I don’t know how.” She also moved back to Winnebago County — spending time in Oshkosh and Fond du Lac.

She had just finished her night working at a printing shop in Oshkosh and met with her ex-boyfriend to get some drugs to cure her withdrawals.

They snorted the drugs on the side of the highway and were on their way back to Oshkosh. Kristina’s children were expecting her that night.

It didn’t take long for the powerful opioid to kick in. A truck driver noticed the car Kristina was riding in swerving in and out of the traffic lanes.

The truck driver called police and reported an erratic driver to the dispatcher. The dispatcher put out a call and authorities were on their way.

By the time Winnebago County Deputy Michael Huth pulled the car over, Kristina was in the fully sedated state of an overdose and was inching closer to death by the minute. Her head was hanging down and her seatbelt was the only thing keeping her upright in the vehicle.

Huth asked the driver what was wrong with Kristina and the driver said he didn’t know. Huth put out an emergency call to any deputy in the area. Deputy Nathan Dahm was in the area, coming from the south on Highway 41. As soon as Dahm arrived he went straight to Kristina.

“She was purple, she was dead,” he said.

He pounded on her chest with his knuckles to try to generate a reaction.

Kristina was unresponsive. Dahm pulled her out of the car onto the frozen pavement of Highway 41. Dahm lifted Kristina up but she was limp, her limbs moving like a rag doll as her head rolled back and forth uncontrollably; passersby would have thought she was dead.

Dahm ordered a dose of Naloxone, a nasal-spray that counteracts the life-threatening effects of an overdose.

He administered one dose — no response.

He administered a second dose and yelled out her name.

In a split-second the drug took affect and Kristina’s pulse returned. She mumbled a word. She was still far from being in stable condition, however, and Dahm knew he needed to do more if she was going to make it. He called for paramedics and did everything he could to keep her alive

The paramedics arrived and administered an IV, lifted Kristina onto a stretcher, loaded her in the ambulance and took her away. Dahm followed the ambulance to the hospital. When he arrived at Kristina’s room he was surprised by what he found. “Kristina looked like a completely different person,” he said. Kristina was speaking, her eyes were wide open, and she was sitting upright.

The first words Kristina said to Dahm were, “Thank you for saving my life.”

Dahm’s supervisor saw the body cam footage and told Winnebago County Sheriff John Matz that he should also take a look. Matz knew he needed to do something about what he had witnessed. He called Kristina and asked her to come to his office. He wanted to show her what he had just seen. 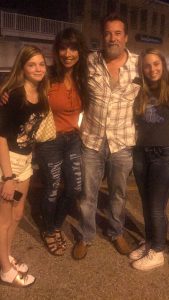 Kristina’s parents with her daughters.

Kristina, however, was still using. When the sheriff called her, she ignored the call. When she didn’t respond, Matz sent officers to do a welfare check at her house but instead of answering the door, she hid. It took her two weeks to return his call.

Matz asked her to come in and view the tapes and she agreed, bringing her mom along for support. Watching the tape was an emotional experience for Dahm, Matz, Kristina and her mother.

“Some people might have come in and said, ‘Cool, I got to see myself dead’ and gone on and continued using,” Matz said. “But Kristina was different. You could tell that she was really sorry and that she really cared.”

Kristina cried while she watched the video. She swore she wanted a new life, but continued to use for a year after. “Wanting to change and changing are two different things,” Kristina said.

During that time, Matz periodically texted Kristina to check up on her. In the summer following her overdose, Matz texted Kristina and received a message from Kristina’s daughter.

Matz was broken by the text. Although he never met Kristina’s daughters, he said it seemed like an extremely grown up individual was texting him — one who had seen her mother at her lowest before.

Not long after Kristina’s daughter responded to Matz’s text, Kristina arrived at the Winnebago County Jail after being caught with methamphetamine. Confined to a jail cell, Kristina realized it was time to give it up. She was ready to make a change.

She made an appointment to speak with the sheriff while she was in jail and asked him how she could get sober. Matz didn’t know. He cared about Kristina, however, and researched state-funded rehabilitation options and found Nova Counseling Services just half a mile away from the sheriff’s office and county jail.

He made an appointment for Kristina at 8 a.m. the day she was to be released. Although that was not a required part of his responsibilities as sheriff, he said he did it because Kristina was someone’s daughter and he recognized that she had a disease. He knew she wanted to get better and he did what he could do to set an example and help her.

Kristina made it to the counseling’s services and met the assessment standards. She was allowed into the program and the state paid for her to recover. She made it through three months of in-patient treatment and was three months sober following her stay in jail.

“She looked like a completely different person by the end of it,” Matz said. 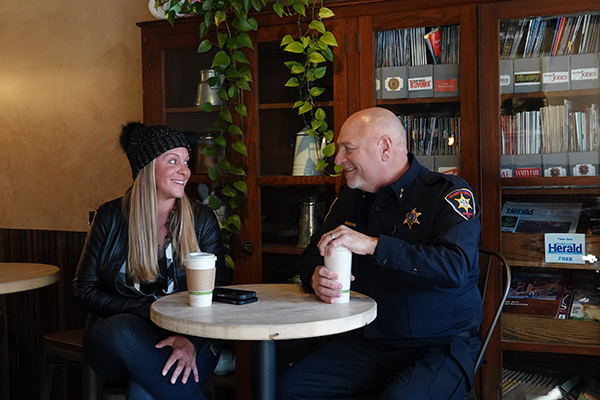 Matz and Kristina still talk once a month. They recently met for coffee at Planet Perk in downtown Oshkosh for the first time in over a year. They embraced and teared up. Kristina and Matz may be completely different people but they have gone through a lot together.

Kristina finished her probation. She moved to Rice Lake, Wisconsin, with her mother and oldest daughter. She regained custody of her youngest daughter. She began to put the pieces of her life back together.

Nowadays you’ll find Kristina working in construction as a talent recruiter. She loves her job. She is making more money than she ever expected. And she’s saving that money, too. She has goals to buy a house, a newer car, and to grow her family into everything she ever wanted it to be.

Kristina’s life has come full circle. She experienced the depths of addiction, sunk to the lowest of the lows and came out on the other side. She experienced more hardships than any person should have to take. She has overcome her addiction and became the mother her children can be proud of, the mother she always knew she could be.

As a changed person, sobriety looks good on her. Her face has a glow, she is a healthy weight and although she has scars from her addiction, those scars remind her of where she has been. Kristina doesn’t look back with any desire to revisit her addiction. She recognizes that life is worth living when it is lived for her daughters and her family. She counts every day as a blessing. “It’s never too late to change your life,” Kristina said. “I never thought I would get to where I am today, but I couldn’t be happier.”