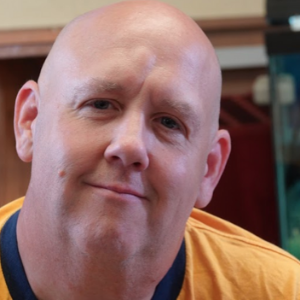 as told to Neal Hogden 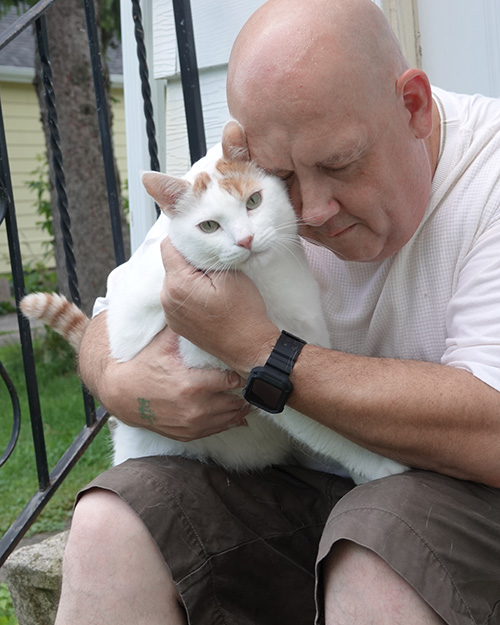 Chris with his cat, Rommel.

“My mom got pregnant with me when she was 16 and my dad was 21. My parents were hippie-type, heavy drug addicts. My dad sold cocaine. You know the movie ‘Blow’ with Johnny Depp in it? That guy who the movie depicts was one of my dad’s best friends. So my dad was one of the major cocaine dealers in the 70s and 80s in Venice and L.A. I used to deseed all their marijuana when they were hanging out with their friends. Back then the marijuana had seeds in it so you’d take the seeds out, de-stem it and make it so they could roll a good joint. I started using marijuana and drinking when I was 6. They were always partying so they’d say, ‘Look! He wants to smoke pot!’ They thought it was funny, I guess. I was a full-blown alcoholic by the time I was 12. On January 19, 2013, I stuck a gun ⁠— a Black Powder .50-caliber rifle ⁠— in my mouth. I was doing crazy stuff like drink and pass out and wake up, drink and pass out. I was drinking about a gallon of vodka every 8 to 10 hours. I was just feeling miserable for myself. I was going to kill myself. My cat came up to me and rubbed on my leg right when I was about to pull the trigger. That was Mr. Pooh. Pooh rubbed up against me and I had a moment of clarity for a second. I spoil my cats, 100 percent. I said, ‘The shitty thing is nobody’s going to be able to take care of you guys like I do.’ So I put the gun down and I pet my cat. The cats ⁠— Arugula was there too ⁠— knew that something was wrong because they wouldn’t leave me alone. Cats are intuitive like that.”

“I’ll be at work and there were a lot of parties that were happening and they wouldn’t invite me and I was getting mad. I was like, ‘Why the hell are you guys never inviting me? Do you guys fucking hate me?’ or ‘What’s your problem?’ They said, ‘No, it’s just that you’re an alcoholic and we were going to drink.’ Well, I can go to bars. I can hang out with those kinds of people. I don’t choose to put myself in certain situations. It’s not because of the fact that I’m worried about it; I don’t have a craving for alcohol at all. It’s not my go-to anymore. I’m a recovery coach. I’ve taken the training to learn how to deal with people with mental issues, alcohol, drugs and all that stuff. We work with people like the police department or the hospital. They’ll call us when they have somebody in a situation. I’m usually one of the ones that go to the hospitals and meet with people and then try to get them resources and make sure they’re doing well. Two of the people are coming up on over six months sober and doing well. I tell the people I coach, ‘There is hope; I was there — I know, and here I am. What can I do to help you to get where you need to go because I’m right here. Here’s my hand.’ That’s what you’ve got to do. Some people just need a hug.”

Chris Kessler, 50, has been living in recovery since January 21, 2013. As a certified recovery coach, volunteering with PRISM (Peer-based Response, Information, Support, and Maintenance), he helps others by sharing his own recovery experiences. Chris lives in Oshkosh, Wis., with his five cats. Mr. Pooh, who Chris credits with saving his life, died in 2014 after being hit by a car. For more FIXED stories, please visit www.uwosh.edu/fixed.)