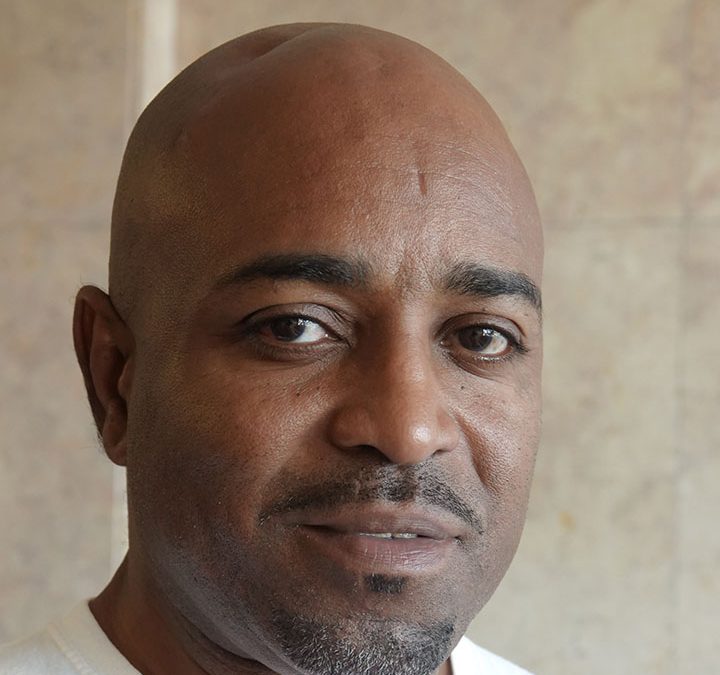 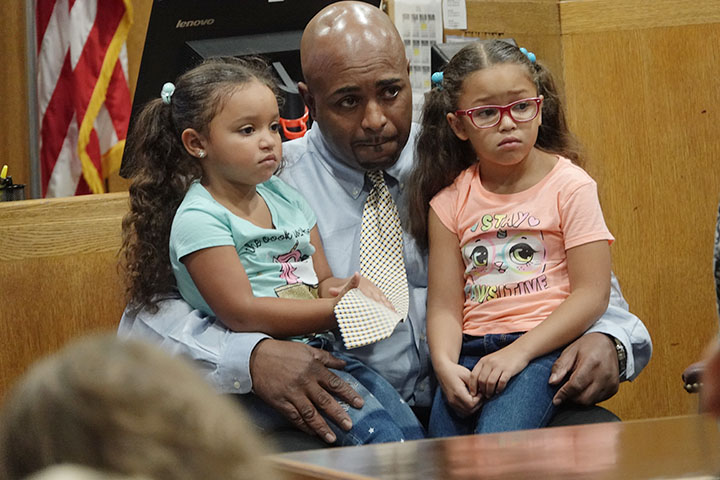 Myron Batiste shook his head and laughed at the mugshot showing a sullen man with dead eyes, staring into the void. Wearing his best shirt and tie, Myron was laughing because he is no longer the same man in that photo. On this day, Oct. 10, 2019, Myron is one of four people to complete the Winnebago County Drug Court program.

The 54-year-old Oshkosh man held his daughters, Kriscilly, 7, and Aaliyah, 4, in the courtroom as his case manager, Jennifer Delfosse, spoke on his behalf at the commencement.

“He truly came in sick and tired of being sick and tired,” Delfosse said. “Through this program, Myron has learned many new things [and] he has been engaged in many functions and groups. One of the things I love about Myron is his willingness to help anyone in need.”

Before drug court, Myron would regularly leave his family in pursuit of a high. Now he’s a devoted father, domestic partner and a strong advocate for those still battling drug addiction. He volunteers weekly at the Boys and Girls Club of Oshkosh, telling young people his story as part of H.O.P.E. group, an initiative that aims to educate young people about the dangers of substance abuse. It took two years and two months to get to this moment, but the path to drug court took much longer. 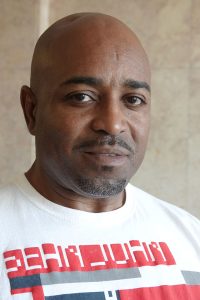 Myron was born to a well-to-do family in Louisiana in 1965. His father was a small business owner and his mother was a supervisor at a hotel. Myron had his first sip of alcohol at 13 years old, sneaking gulps of his grandmother’s homemade wine before moving on to the stronger stuff. Eventually, he would drink his parents’ clear alcohol and refill the bottles with water. His substance abuse escalated when he reached his 20s and began going to clubs on the weekend. “As the years progressed, the usage of alcohol became more and more,” Myron said. “Then I started finding myself partying with people that were doing more than just alcohol, and they’d always try to get me to try.”

After refusing for a while, he finally gave in. He started with alcohol, marijuana and cocaine, but eventually he said he tried “pretty much every drug that was out there.” It started out as “just a party thing,” but it slowly developed into a coping mechanism.

“I would use to hide the pain of my emotions or feelings that I didn’t understand, and then it became an addiction,” he said.

Myron’s addiction spiraled into a vicious cycle of using drugs, running out of money and committing crimes to get money for drugs. He’d get out of jail for a while, get a good job, get into a relationship and start using again because he didn’t understand how to deal with his emotions. “That happened over and over for the last 30 years,” Myron said. “And this last time I was missing from home for two weeks, doing every drug that was out there and in jail with four different charges.”

In July 2017, Myron got in a fight with his fiancée, Emily, about how to discipline their children. After the argument, Myron took off; he needed a drink. He went to a local dive bar, and he ran into an old friend that he wasn’t supposed to be in contact with because they had committed crimes together in the past. But after a few drinks, he didn’t care. They went back to the friend’s home and Myron went back to using. He drained his bank account to pay for drugs, which led the pair to steal TVs for money. A few days passed and Myron knew he messed up. He called Emily and she immediately asked, “What did you do now?”

He didn’t know what she was talking about. He knew that he hadn’t been to work in weeks, but Emily explained that he was on the news and there was a warrant out for his arrest. She told him that a police detective was parked outside, waiting for him to come home. At that point, he gave up. Myron told himself, “I’m just gonna get high until I die.” He felt like his life was over because he was already on probation and now there was a warrant out for his arrest. A few days later, Myron and his friend went to a pawn shop to sell some tools they had stolen. The police showed up and arrested them both on theft of merchandise charges.

When he was in jail, he caught wind that his probation could be revoked. He had heard about a program called drug court, and he inquired about how to join. He knew that his life needed some kind of structure if he was to change his ways.

“I knew then that I was tired and that I needed help; I never admitted it to anyone before,” Myron said. “This time when I woke up in jail I spoke to the drug court agents. That was the first time in my life that I admitted I needed help.”

To get accepted into the program, Myron was interviewed, his past criminal history was examined. It was determined that his crimes were a result of his substance abuse and he was admitted to the Winnebago County Drug Court on Aug. 10, 2017. He filled out paperwork and was released from jail to begin the first phase. He quickly found a sponsor and started going to treatment. One month into the program, he got a job at Mercury Marine as an assembler. He was cruising right along in the program when he hit his first hurdle. 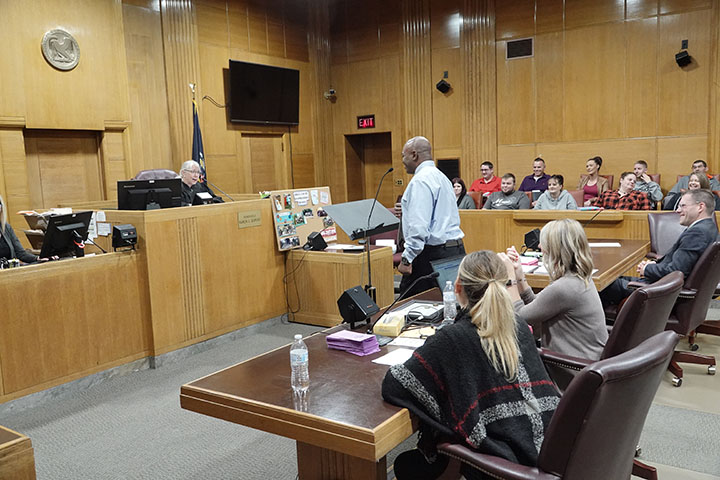 Seven months into the program, Myron thought all of his criminal charges were behind him, until he was recharged with one of the crimes from his final bender. The charge almost threw Myron off the path to recovery. At the time he thought, “Where do I go from here?” He went to Delfosse, his case manager, and told her he was concerned. She told him to “trust the process,” and he did. He spent three months under house arrest, but afterward he was able to finally put the past behind him.

Months after house arrest, in March 2018, tragedy struck again. He was working at Mercury Marine when 2,500 lbs. of metal crashed down on top of him. He was flown to Milwaukee for emergency brain surgery because the metal had slit his head wide open.

His neck was broken in two places. He broke 11 ribs and had a torn meniscus in both knees. He has screws in his neck and needed surgery in both knees. The accident also caused damage to the part of his brain that controls the nerves in his left arm. He’s still going to physical therapy.

“When I first got out of the hospital, I couldn’t zip up my jacket, put on my socks or tie my shoes,” Myron said. “A lot of the things that I took advantage of, I didn’t really think much of, so it made me appreciate life a lot more.”

For Myron, having to ask someone for help was a humbling experience. His young daughters have been like “little nurses,” helping him do things that he used to be able to do by himself.

“I used to always think I could do everything on my own,” Myron said. “But now I have to ask people to help me and I’m OK with that.” 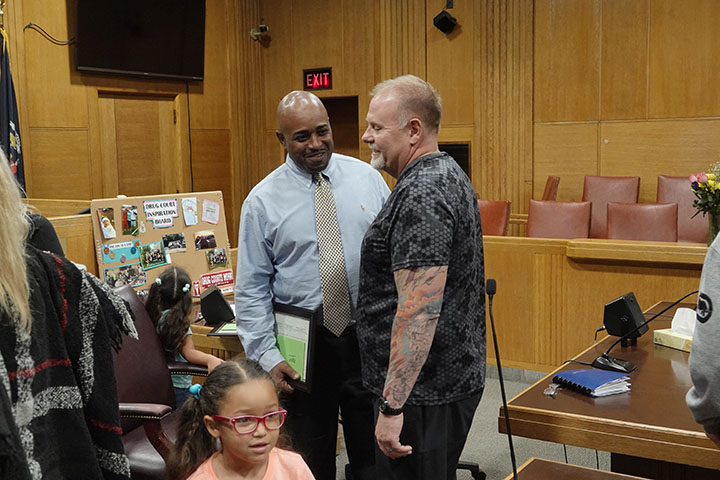 Throughout the trials and tribulations Myron’s faced since starting drug court, he continued to attend weekly drug court sessions, even when he wasn’t scheduled to attend. “I’ve been coming to court every week since I first started, two years ago, because I like being here now,” he said. “I used to be afraid of courtrooms, but now I come to learn from others what to do and what not to do.”

“Coming [to court] and listening to everyone get up and talk, you learn the positive things that someone else was doing to stay on the straight path,” he said. “It’s like a learning process each time that I come.”

Drug court helped him find his voice. Growing up, Myron never shared his thoughts or feelings. Now, he shares his thoughts and feelings with anyone willing to listen. It’s also helped him take a step back and look at the bigger picture and enjoy the small moments with his children.

“To sit and play board games with them, to sit and color with them, watch movies with them; I wasn’t doing any of that,” Myron said. “And now that I’m doing that, it’s built a better relationship with us as far as them listening to me and listening to their mom.”

Drug court has allowed Myron to become a more reliable partner. Before when he would disappear, his fiancée, Emily, didn’t know if he’d pick up the phone when she called or even call her back. But now, “he calls back shortly after to let me know what he’s doing,” Emily said. “If he’s out with buddies at night, I don’t have to worry about it because I know he’s going to come home.”

Myron, she says, has become a reliable partner and someone she can trust to pick the kids up from school. Since getting sober, he has returned to being the man who Emily first fell in love.

Myron feels more responsibility since finishing drug court because it’s up to him to continue to stay sober and continue to be the father his children deserve.

Finishing drug court isn’t the end of Myron’s story, as he plans to continue telling his story in hopes that it will inspire others to change their lives for the better.

“If you don’t stand for something positive, then negativity will always control you,” he said. “I’m willing to stand in recovery and share my story with people and I’m not afraid to tell them about all of the mistakes I made and all the wrong things I did because somebody needs to hear that in order to change their life.”