The Story Behind The Story with Jenna 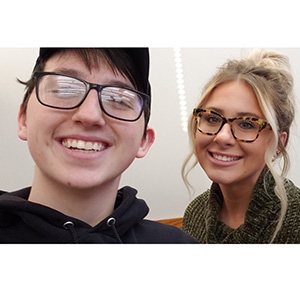 Before starting this class, I was aware of the opioid crisis but I wasn’t very knowledgeable on the subject. I understood that it was a national issue, but I didn’t realize that it was happening right around me here in Oshkosh. It affects everybody: from husbands, wives, aunts, uncles, cousins, brothers, sisters and friends. I didn’t realize that dozens of people in our community died each year from the opioid crisis, and even more in the state and the nation.

Before meeting Jenna, I had only read transcripts. I had a backstory on what she did for a living, who her sisters were and some of the stories that came out of growing up with them and their struggle with addiction. It was interesting to think that I would know her life story before we even met. It was July 2019 when my instructor Grace Lim and I drove to Jenna’s apartment to interview her and her niece, Makayla, for this project. I was incredibly nervous. I had no idea what I was getting myself into – what would she be like? What was her living situation? What kind of person is Jenna? I was shocked to think that Jenna had been through these experiences that I had only read in transcripts. I would not have seen the trauma, abuse or even previous drug use. I wouldn’t have thought that Jenna had her hair pulled out when she was a teenager over something as small as a CD. I never would have thought that she experimented with opiates when she was in high school. When Grace and I arrived, I wasn’t sure what I would be walking into. But when I first saw Jenna, I had an idea.

It was the typical “hipster”, “live, laugh, love”, Pinterest and minimalist white-person apartment, but it looked great. There were succulents and motivational art displayed around the living room and the ambiance radiated a positive vibe-like feel. My nerves from even being there went out the window; I was immediately comfortable. I felt like I was welcomed and at home. I can’t imagine what bliss Jenna feels being there every day. Cloud nine? Probably something close.

When it came to interviewing Jenna, I was initially surprised at how calm she was over having to repeat her story several times. But this is what she does. She shares her experiences and empathizes with the community through the Winnebago County Drug and Alcohol Coalition and her career as a teen substance abuse counselor. She is one of the most understanding and cooperative people I have ever met. Jenna has a wall though — she doesn’t show her emotions. Rightfully so, as she has been through a lot in her life. It is understandable that, in Jenna’s place now, she can’t really talk about her own personal accomplishments with her sisters who are recovering from drug addictions. She shares her story thoroughly, but it seems like she has blocked out her emotions and reactions to any of it happening.

I’ve followed Jenna around in a few other cases, one being at the Boys and Girls Club of Oshkosh. It was heartwarming to see how many kids there recognized her face and interacted with her. It just further shows how much of a difference she is making for our society. As cofounder of H.O.P.E. Group, she created an outlet for teens to share their experiences with peers who have been through the same. She knows what the pain is like through addiction in her family, and she doesn’t want others to experience the same if she can help it.

From my interactions with Jenna, I have learned that despite any person’s hardships, there is something on the other side. There is always another side to every story. And even if they share their part of it, there may be some missing links and pieces that they aren’t willing to share. That’s part of understanding and knowing how much these experiences have actually affected them.

I was fortunate enough to receive transcripts from Grace Lim’s first interview with Jenna, so that was enough for me to get some information for follow-up questions on my own first interview with her. During another interview with her though, she gave me the names of her sisters and parents so I could search their police records. This gave me insight as to what some more specific things were that her sisters and mother have done. When I was interviewing Jenna, I was empathetic. I tried to be understanding, which as a reporter can be detrimental, as our job is firstly to get the story.

As I’ve been interviewing and following Jenna for the past five months or so, I have learned that a little can go a long way. It can be one conversation, one question, that changes somebody’s entire life. It goes to show that compassion for each other can really mean a great deal, from helping a family member or a friend. Reaching out a helping hand or not can mean life or death for some people, especially for the opioid crisis.

As a journalist, I’ve learned that even though we are getting a story, the person that we’re interviewing is just that: a person. They have emotions and have been through things that we may not be aware of. It’s important to keep an unbiased eye when getting the story, but also being kind can help as well.

From participating in FIXED: Pain, Addiction and Life in Recovery, I feel has changed me as a person. This project has shown me that in whoever I’m interviewing is a story that not every person knows about. This class has allowed me to report in a way that’s friendly yet unbiased. I know to get the story first before connecting with them on a personal level. As a compassionate person myself, I can’t not connect with everybody I come by. It’s natural.

As readers are going through Jenna’s story, I want them to understand that there are resources out there for those struggling with addiction. I want them to take away from this story that there are people willing to help you through difficult situations, whether it be family or friends. Understanding the other side of an addict through the lens of their sibling is important because, first of all, it shows that there are more than just the person struggling with addiction who are affected. It shows that this is a problem that should be addressed as a community because of who all is impacted by this.