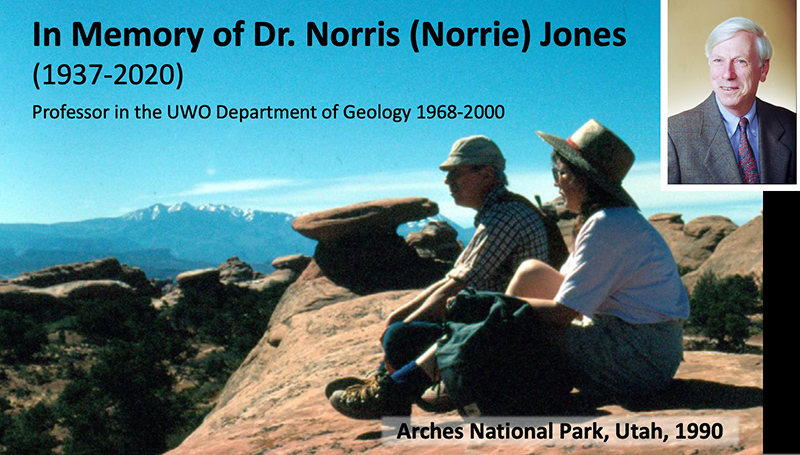 Dr. Jones received a BA in geology from Carleton College in 1959.  In 1963, he received an MS in geology from the University of Minnesota, and completed his PhD in Geology in 1968 from Virginia Tech. Dr. Jones joined the UW Oshkosh faculty in 1968 and served as Chair of the Department of Geology from 1981-84 and 1996-1999. He met the world with a positive attitude, always saw the best in people and was known for his sense of humor. Dr. Jones published many scientific papers, but his lasting legacy is the hundreds of former students that he mentored. His ability to inspire and teach how the Earth works with his patient and kind demeanor not only challenged students but also provided an example of an exemplary life.

Dr. Jones authored a widely used Introductory Geology laboratory manual and since 2003, has shared authorship with his son Dr. Charlie Jones, a Geology professor at the University of Pittsburgh. The manual is now in its 9th edition, and it is still being used in introductory courses here at UW Oshkosh and universities across the U.S.

Dr. Jones received several awards in recognition of his teaching excellence, including the John McNaughton Rosebush University Professorship and the UW Oshkosh Distinguished Teaching Award.  He was awarded the James F. Duncan Research Award based on his field geology research.  Dr. Jones held the EAA/C.R. Meyer & Sons Co Endowed Professorship and retired in 2000 after 32 years as a faculty member. Dr. Jones passed away on Thursday, April 9, 2020 at Evergreen Retirement Community in Oshkosh.