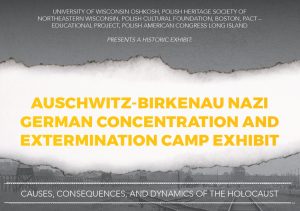 Steinhilber Gallery, on the third floor of Reeve Union, will be exhibiting the Auschwitz-Birkenau Nazi German Concentration and Extermination Camp Exhibit from September 5- September 27.  See the website for hours.  The gallery and all other events are free and open to the public.

This exhibit is on loan from the Auschwitz Birkenau Memorial and Museum in Poland.

It consists of 31 panels documenting the development of Nazism, the beginnings of the Holocaust, and the camp itself.

The exhibit is sponsored by:

This exhibition will be complemented by an series of presentations to provide background, context, and relevance.

Eva Zaret was a young woman in Budapest when the Nazi regime laid siege on her home town. She survived the war and years of displacement in the harsh Carpathian Mountains.

Here is the video

“How to teach the Holocaust”  Gallery opens at 4.

Panel discussion:  “Genocide and Hatred in the Modern World”