Previous Spotlights on Teaching and Learning 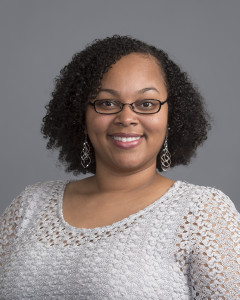 Dandrielle Lewis has been an Assistant Professor in Mathematics at UW-Eau Claire since 2011.

She received her Bachelor of Science from Winston Salem State University in 2001, her Masters of Science from the University of Iowa in 2006, and her Ph.D. from SUNY Binghamton in 2011.  From 2011 until now, she has served as a member of the University of Wisconsin Women and Science Advisory Board. The mission of this program is to attract and retain more women and minority students in STEM by promoting systemic changes in the ways that science and science education are regarded and carried within the University of Wisconsin System.  From 2012-2015, she served as a math instructor for UW-Eau Claire’s Math and Science summer program.

She continues to be an advocate for broadening the participation for women and minorities in STEM as director and organizer of UWEC’s Sonia Kovalevsky Math Days for high school and middle school girls.  This day is a program to encourage girls to pursue higher education and careers in STEM through exposure to STEM opportunities, workshops and panels, and networking opportunities with prominent women who use STEM in their careers (2013-Present).  She received funding from the Association for Women in Mathematics to start this day.  She also serves as Co-facilitator of a Domestic Intercultural Immersion Program, “Embracing the Somali Immigrant Experience in Midwestern Public Schools” which increases awareness and understanding on how race, background knowledge and experiences, culture, religion, and gender, impact school environments. She has recently published an article on increasing diversity and inclusion for women in STEM and has written a chapter on the Somali Immersion Experience.

She received UW-Eau Claire’s Distinguished Service Award for contributions to educational excellence and diversity from the Office of Multicultural Affairs, and she received the UW System Outstanding Women of Color in Education Award.  She has served as a panelist for the National Science Foundation and the UW System.  She is scholarly active within her field of Mathematics, which is Finite Group Theory, and she has given presentations on her research locally and nationally.

She has participated extensively in undergraduate research and mentoring at UWEC, nationally, and with the WiscAMP program all in the hopes of exposing more women and minorities to opportunities and possibilities in STEM fields.

The Wisconsin Louis Stokes Alliance for Minority Participation (WiscAMP) is funded by the National Science Foundation to increase the number of underrepresented ethnic/racial minority (URM) students who complete the baccalaureate degrees in science, technology, engineering and mathematics (STEM) disciplines. Between 2008 and 2013 the WiscAMP alliance, which includes all UW-System schools and colleges successfully doubled the number of URM undergraduates who completed their 4-year degrees in STEM. With its renewal in 2014, WiscAMP is collaborating with Dr. Christine Maidl Pribbenow to disseminate FAIR PLAY a video learning game to teach faculty and staff how stereotypes can inadvertently influence judgment about and behavior toward others, also known as unconscious or implicit bias. In the game, Jamal, an African-American graduate student, encounters a number of bias incidents as he navigates through his academic career and interacts with faculty, staff, and students on a college campus. The purpose of the game is to invoke curiosity and to spark sustained engagement with learning about the role implicit bias might play in judgments about students, colleagues, and issues relating to increasing diversity in STEM.