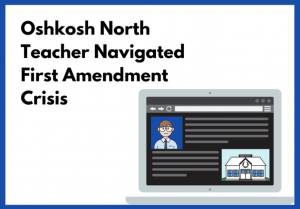 Last April an Oshkosh North High School teacher found himself at the center of breaking news stories concerning the First Amendment rights of his students. Jason Cummings, an English teacher and faculty adviser of the North Star, the student newspaper at Oshkosh North, allowed his students to publish a story on the questionable absence of the school’s assistant principal. The story featured one anonymous source that revealed vice principal, Hans Nelson, was resigning after locking bathrooms on the first floor of the school to combat vandalism.

Cummings took the story down an hour after it had been posted after discussing the topic with fellow teachers. What followed was a crisis between the Oshkosh Area School District (OASD) and the North Star surrounding the disciplinary actions of those involved and the First Amendment rights of the students.

The end result of the crisis was a press release from the OASD Board of Education outlining that they would no longer pursue disciplinary action, give the story back to the paper and implement a new policy that would eliminate conflict in the future.

A Change in mind

While many people disagree with how the OASD initially handled the situation, it is remarkable how quickly the OASD changed their approach. Cummings explained what the North Star did to stand up for their rights, how they achieved change so quickly and what they would have done differently, recommending other school publications follow suit if confronted with a similar situation.

Cummings notes this situations highlights several important lessons for student newspaper advisers. Oshkosh North student, Brock Doemel, published the story with only one anonymous source, focusing the district’s attention on the single leak. If Doemel had incorporated every source that he questioned into the story, it would have had more credibility as a whole.

“I should have had Brock include more sources stating, ‘we can’t comment on that right now,’ and we would have had three to five sources,” Cummings said.

Online news is different than print in that journalists can publish a breaking news story and tell readers it will be updated later with additional sources, but it is best to strengthen credibility with sources right away. Cummings said this is the only thing he would have done differently before the crisis began to unfold. As a faculty adviser, he suggests best practices to his students but he cannot censor their stories as long as the topic is within the scope of relevance.

“After we had already gotten into the mess, I wouldn’t have done anything differently,” Cummings said. “Our back was against the wall, so we said this is it. We had to stand up. The best way to cure any problem in life is to show the truth and bring it out in the public.”

So Doemel called news agencies and they brought cameras and reporters to the board meeting. “We were sitting in a meeting with three camera people,” Cummings said. The more people that knew about the situation, the more people would contact the school board. “And that was what happened,” Cummings said. “They got so many letters from lawyers that that was what the big push was.”

Cummings credits the timeliness of the resolution to making connections with the right people. “Being involved in NEWSPA, professional networks, the Student Press Law Center, and having lawyers standing right next to us saying ‘we’re going to do this, this and this for you’ is what made a difference,” Cummings said.

Everyone that the North Star reached out to rallied around them. “I called some of my former editors that had a lot of voice,” Cummings said. “One of them is currently a lawyer and he wrote a three page letter and talked to Dr. Cartwright, Superintendent of Schools, Oshkosh Area School District, on speaker phone about what she should do.” He recommended that the district reverse their course, redact any disciplinary action against Cummings and change the school policy to resolve the crisis, which is what the OASD ended up doing.

“I credit my former editors for playing a part in how the OASD decided to handle the situation,” Cummings said. The original letter to Cummings from the district outlined that he had broken confidentiality and had made a terrible ethical judgement by publishing the story. “They turned around and said “we are not doing prior review, no one is being punished and we think you made great ethical decisions”. The lawyers put so much pressure on them and it is amazing how much that helped in the end.”

The OASD is functioning under the new policy, which is a limited public forum. “There is no prior review in the current format,” Cummings said. “I can advise them. I can say this should not be published, as there are a few major restraints on publication, but there is no prior review.” Prior review exists when administrators read and review materials before the story is public. By eliminating this element from the policy, the district is protected and it will help to eliminate any future crises. “I think we are in the clear,” Cummings said. “There is a lot of responsibility [being a journalist], but if you are in the right mindset, have the right intentions and are following the right procedures, really nothing [bad] can happen.”