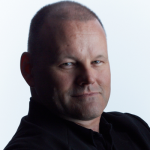 In 1983, Jeff Griffith came to the University of Wisconsin Oshkosh with the goal of working as a creative and seizing any opportunity to entertain an audience.

He pursued advertising in the Department of Journalism with intense involvement in student activities that led to experiences that would take him to a national stage, and earned him an Outstanding Young Alumni Award in 1989 and Distinguished Alumni Award in 2013.

His start at UWO was with Radio-TV-Film. He switched to journalism to pursue a career in advertising – participating in the National Student Advertising Competition (NSAC) for four years – and taking up any opportunity to grow.

He participated in the Advance-Titan, Reeve Union Board and Ad Club, as well as working for the Miller Brewing Company marketing team.

Griffith said those UWO activities and experiences in the Department of Journalism, particularly NSAC and Ad Club, helped him gain the basics of persevering and making connections in the field.

While in college, Griffith climbed the ladder at Miller from designing logos for local distributors to eventually designing content for the corporation.

As a result, Griffith got his first freelance gig for a group of family-owned restaurants in Oshkosh, which meant he had to meet “real-world deadlines.” He also interned at a local ad agency.

“In that situation, it was a real client, they paid me money… I had to deal with real-life situations and real deadlines,” Griffith said. “If it didn’t get done cause I was out partying all weekend, I got in trouble… that was a fantastic, real-life situation.”

Griffith established a scholarship in 1990, which is offered to advertising and public relations majors each year. He reviews applicants, seeking dedicated students that show passion for their career.

After college, Griffith worked in Honolulu, then Atlanta and New York.

While in New York, Griffith became the creative director of integrated marketing at Men’s Health Magazine. It was there he was in charge of making stories and ads fit together seamlessly on the website or in the magazine.

“Whatever the client was trying to promote at the time we were trying to integrate it into the site or the magazine,” Griffith said. “That was not easy for every client. Some clients really wanted to sledgehammer people over the head [with their product].”

Griffith, a lifelong history buff, further found his passion by offering his creative services for a grassroots group in Gettysburg, PA called No Casino Gettysburg, a pro bono project.

At the time, the group was fighting against a local millionaire and a $4.3 billion gaming company that wanted to build a casino just a mile and a half away from the Gettysburg National Military Park where soldiers fought and died. Griffith learned the organization had 10 minutes to state its case at a hearing and decided to make a video to show in that time. Griffith wanted to get all the celebrities he could who cared about the hallowed ground involved in the project.

“I just started building this group of people of actors and historians,” Griffith said. “I literally went on IMDB and found out names of their publicists and contacted the actors myself. I made phone calls, sent emails, talked to friends of friends of friends to make this happen. Then I used all my connections from the past, video people, people who had studios I could borrow, editors, music composers, sound mixers, to put it all together.”

In the end, the group and Griffith together defeated the casino, which resulted in an incredible partnership between Griffith and the Civil War Trust, an organization that preserves, protects and purchases all endangered battlefield land in the United States. Since 2011, he’s been designing their quarterly membership magazine Hallowed Ground which has received numerous design and photography accolades from the Society of Publication Designers.

“Here it was, this incredibly perfect storm of my lifelong love of history and love of advertising and design and then suddenly I’m kind of thrust into this big issue and we’re saving historic land. I was able to really be a part of it, which was pretty cool,” Griffith said.

“And quite honestly, all of it was as a result of my preparation at UWO…the NSAC competition, the internships, the work with RUB’s Activity Council and my journalism professors who were relentless. We’ve become a society of sloppy spellers (SoSS) because of the computer. But our teachers docked us for bad spelling and I’m the same way when I meet someone and look at their resume or their creative work. Even if it’s a photographer or a journalist, they better have the person’s name spelled correctly in a credit or caption! There’s no excuse. It’s about always being your best.”