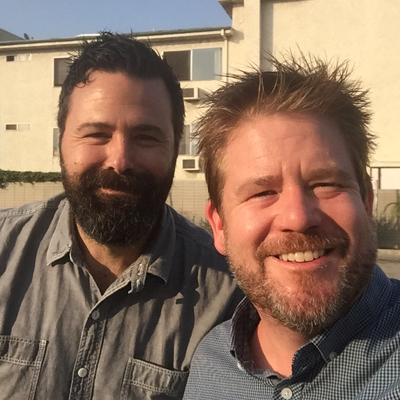 A textbook helped Jeff Maki find his niche in advertising. For Chuck Monn, it was his experiences in Ad Club and the National Student Advertising Competition that cemented his desire to work in the field.

The two were named UW Oshkosh Outstanding Young Alumni in 2002 for their work with Chiat\Day, an advertising firm that has done work for companies such as Taco Bell, Apple and Sony PlayStation.

But Maki said he wasn’t always sure of his career path. As a sophomore, he had an interest in literature and art, and considered majoring in English and becoming a teacher.

“But I didn’t have a ton of passion about it,” he recalled. “Then one Sunday I was in a friend’s room in Taylor Hall and I picked up an intro to advertising textbook. As I started flipping through it, I read about the strategies that were behind some award-winning ads. I spent about an hour reading this textbook on a Sunday and I realized there might be something there for me.”

Once Maki started journalism classes, he found his passion while working at the Advance-Titan, he said.

“Things first started to click for me at the Advance-Titan,” he said. “I held several positions — proofing, ad production and ad sales — and it helped me realize how much I loved working in a team environment, making something from nothing and delivering something we were all proud of on a deadline.”

Maki said he worked for the A-T from 1994-96, a historic time for the student newspaper.

“We were  transitioning the paper from printing on a traditional press to printing from a digital file, and that meant mocking it up the old-school way AND building a digital version of it each week. It was double the work for two entire school years, but it was an interesting experience to be a part of.”

It was those experiences at the A-T that helped prepare him for his favorite experience while in college — competing in the American Advertising Federation’s National Student Advertising Competition under the leadership of Dr. James Tsao, then an advertising professor at Oshkosh. “That changed everything for me and solidified where I was headed.”

“The team that Dr. Tsao recruited for the NSAC was a determined crew,” Maki said. “In fact, the core team went through it twice together. We didn’t do very well on our first attempt, but we learned a lot. On the bus ride back to Oshkosh, Dr. Tsao got the entire team’s commitment to return and seal the deal the next year. And the next year, after another semester of late nights and way too much Pizza Pit, we made it to Nationals.”

Competing in NSAC was also one of Monn’s favorite memories from college. “Working with Jeff Maki, Greg Kamin and a group of amazingly talented and driven alumni was an incredible education itself,” Monn said. “We created our own advertising agency, formalized the Advertising Club and went to the national competition for AAF in San Diego. It was significant only because it was the first time I had ever been on an airplane.”

Coincidentally, it was also Maki’s’ first real airplane flight, with the exception of jumping out of a plane one time as a freshman. “The competition was next-level for all of us,” he said. “We did well as a team, but were bested by other teams from around the nation. That didn’t stop us from hopping over the border to Tijuana to celebrate.”

Maki said he had a life-changing experience in California on that trip, and eventually decided to move West after graduation in order to make his dream a reality. While in California, Maki and Kamin took a bus to L.A. to visit Kamin’s brother. A friend of Kamin’s brother gave them a tour of her workplace, Chiat\Day, and Maki realized that this was the place he wanted to work.

“It was a historically famous shop in the middle of one of their best runs ever, Maki said. “The energy and passion and talent were intoxicating and I knew that day that I wanted to be in an environment like that. Actually, I wanted to be in THAT environment and nowhere else for my first job. So I moved to L.A. and Greg and I both got jobs at Chiat\Day.”

Maki did not get his dream job as a copywriter as soon as he moved to California, but he didn’t give up either. He started at Chiat\Day answering phones and stayed in order to establish himself, he said.

“I should say this is a much longer story and I’m making this sound easier than it was,” Maki said. “I was an aspiring copywriter, but I had no portfolio. I just knew I had to get inside that place in some role to see if achieving working there as a writer was even a possibility for me. It took a few months and a lot of meetings with the amazing HR department and I eventually got a job answering phones. I was on the inside!”

Maki said he immediately met people in the creative department and on the new business team and made himself available for anything. “This wasn’t just a crappy paycheck to me,” he said. “I saw it as another vital education I was getting and I soaked it up like a sponge. That attitude and approach served me well and led to a few other jobs assisting top execs and helping out in a bunch of departments while I cranked away on my portfolio in my spare time.”

After two years, Maki was ready to start writing. Meanwhile, Monn had recently graduated from the Portfolio Center in Atlanta, moved to L.A. to be near his college friend, and was looking for freelance art director work.

“I got here by knowing Jeffrey Allen Maki,” Monn said. Maki eventually got Monn into Chait\Day on freelance. “Then one weekend we teamed up on a new business pitch for the International Olympic Committee,” Monn said. “Next thing you know we are a couple of stupid kids standing in front of Lee Clow (one of the most important creative directors over the last 50 years, google it) pitching him our work. He loved it, so did the client and the rest is a story for another day.”

“That Olympics campaign was what officially made me a staff writer at Chiat and it made Chuck and I an official team,” Maki added.

“In addition to where our final days at UWO led me, the Department of Journalism gave me my foundation: A very well-rounded grasp of advertising and media, and a respect for great journalism and what it means to live in a country with freedom of the press,” Maki said.

Now group creative director at TBWA\Media Arts Lab in the Greater Los Angeles area, Monn said the best advice he ever received was from a professor who encouraged him to continue to learn, even after graduation.

“‘Hopefully, you know what you don’t know,’” he said [the professor]. “‘Getting a degree is not the end, but the beginning. You hopefully now understand that you understand very little about the world and that should be a great and powerful thing. Spend the rest of your days learning and growing and challenging your beliefs and what you know.’”

Maki, now group creative director and writer at GSD&M in Austin, Texas, encourages students to stay curious, but balance the staying curious with staying focused. “Make a habit of writing down your goals,” he said. “And get as good at being humble as you are ambitious.”