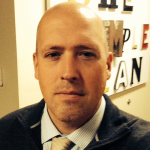 “What does a UW Madison grad call a UW Oshkosh grad? Boss.”

“It is funny because it is often true,” he said.

The Grafton, Wis., native, who graduated from UWO in 2000, experienced this first hand in his career. He currently is a senior vice president at One Simple Plan, a communications and brand engagement agency in Minneapolis. Over his career, he has managed people from Princeton, Georgetown, UW Madison, Notre Dame, Marquette and other prestigious schools.

Feld said he believes UWO is no lesser of a school than any of the other big-name ones. He chose to attend Oshkosh because of what it had to offer.

“I think that it was a good blend of an approachable campus, yet still offered an excellent and demanding educational experience,” Feld said.

Feld graduated from UWO with a major in journalism and an emphasis in public relations.

Prior to coming to college, he was confident journalism was a good path for him, but was not sure what exactly he wanted to do with the degree, Feld said.

“I had a good idea,” Feld said. “I knew I was a good writer. But also quickly understood that the newsroom, as much as I loved the media and the process, wasn’t a great place for me, including for financial reasons. It quickly led me to PR.”

Julie Henderson, a previous UWO professor and the PRSSA National Faculty Adviser, was one of Feld’s most influential leaders while attending college. However, Feld said the journalism department as a whole helped make his college experience beneficial and enriching.

“Once you meet the faculty, you realize their excellence,” Feld said. “The passion and caring of people like Dr. H was really helpful.”

Journalism-related extracurriculars were not the only things Feld become a part of. He was a member of Kappa Sigma Fraternity, Order of Omega and Interfraternal Council. Although he was recruited to play football at UWO and decided not to join the team, Feld still became close with the people in the program.

Feld’s biggest piece of advice for college students is to not only get involved, but to get involved in a wide variety of clubs and organizations.

“What I would tell someone is, don’t just embed yourself in one thing or another,” Feld said. “Take advantage of all of the many opportunities there are at UW Oshkosh. And, that will make you more well-rounded and marketable once you get out.”

After graduating college, Feld went on to work at Weber Shandwick Worldwide in Minneapolis where he was an account executive. He also has worked at decorated firms such as Carmichael Lynch Spong, FleishmanHillard International Communications and Cramer-Krasselt on blue chip brands including Tempur Sealy, Maytag, H&R Block, Ernst & Young, Best Buy, the Minnesota Vikings and many others.

In April 2010, Feld was named to the Milwaukee Business Journal’s “Forty under 40”, list of dynamic young business leaders. Six years ago, he moved back to Minneapolis to help his best friend, whom he had met while working at Weber Shandwick, expand One Simple Plan.

“I’m very proud of what we have accomplished here,” Feld said. “For a 12-person firm in Minneapolis, we have quite a client roster.”

Feld said winning the 2010 Outstanding Alumni Award was a highlight of his career.

“I was hugely humbled knowing all of the esteemed alumni of UW Oshkosh and even in our department,” Feld said. “To even be roughly considered in the same group of those impressive people is humbly exciting.”