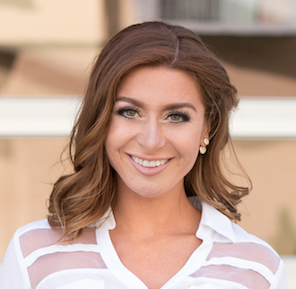 When Haberman isn’t working on “Discover Wisconsin,” she tours Wisconsin raising awareness for alcoholism and writes her lifestyle blog, which focuses on personal and professional development.

Haberman said she grew up on a farm in Evansville, Wisconsin, where she learned the value of hard work.

“My parents never really had a 9-5 job, and I don’t really work 9-5 now either,” Haberman said. “I think that was the biggest thing, just learning how to work really hard and understanding that sometimes in life, work doesn’t really stop.”

Haberman said she faced adversity in college when her stepfather died.

“Just to graduate was a feat in and of itself,” she said. “But I had bigger dreams; I was never the type to let my family life restrict me from getting anywhere.”

Haberman ran for Miss Oshkosh during her senior year at UWO, and she said her pageant experience taught her the importance of never giving up.

“The biggest thing I learned was the importance of getting out of your comfort zone and doing things that terrify you,” Haberman said. “It taught me perseverance, how to figure out what you want and how to build a roadmap to get what you want.”

After graduating with a journalism major in 2010, Haberman went to work for several marketing firms. She said those experiences were a marketing boot camp.

“The thing about agencies is you get a wide array of experience with a wide array of different clients,” Haberman said. “You … go into an agency like that at 22 with your eyes wide open, and you get the feeling when you leave (that) you learned a ton in just a short amount of time.”

Haberman said her involvement with “Discover Wisconsin” started with a Facebook message to a friend who was working at the Discover Mediaworks production company.

“I asked if he could get me in the door and introduce me to the decision makers, [and] we kept in touch for a year and a half,” Haberman said. “They finally let me in for an audition, and it went OK. They offered me a job that was part marketing and part hosting.”

Haberman said she sometimes struggles to balance all her responsibilities for “Discover Wisconsin,” but her inner motivation is what drives her.

“I made a conscious decision when I was in college, and even before I was in college, that my 20s would be dedicated to my career,” Haberman said. “I knew that wouldn’t last my whole life, but it was something that I personally felt strongly about.”

Haberman said one of the main reasons she stays at Discover Wisconsin is because it allows her to do a variety of different things.

Haberman said her willingness to step out of her comfort zone has led to her success.

“I think it’s all about not getting too comfortable,” Haberman said. “I think a lot of people in their careers get angry because they plateau at a certain area and they never feel comfortable diving into things that scare them. I’ve always been intrigued and fascinated and excited by areas that I don’t know a lot about, which has kept me at Discover Mediaworks the past five years.”

Haberman said the people in Wisconsin are her favorite part of the state.

“I love that just about every place we go people welcome us with open arms,” Haberman said. “You can tell they’re very passionate about what they do and where they live.”

In 2017 “Discover Wisconsin” was nominated for a Chicago/Midwest Regional Emmy award for interactivity.

Haberman said being nominated for an Emmy made her feel grateful and reassured her that “Discover Wisconsin” was on the right track with its digital and social media efforts.

“When I came aboard, I wanted to shake things up and make it more appealing to people who are younger,” Haberman said. “‘Discover Wisconsin’ was pretty nonexistent on Instagram and Facebook just six years ago. We came a long way, and to get that recognition validated that we were on the right track.”

Haberman said her advice to college students is to work hard and accept constructive criticism.