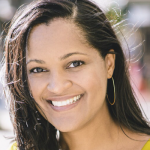 After living in New York for 10 years, Melissa Johnson said she is happier than ever with her move to Florida and with her career as a self-employed freelancer.

“After working in New York almost my whole life, I decided to move to Florida,” Johnson said. “I wanted to work on my own and write my own content. I freelance write for other work contacts I know and I edit and update content for other websites. I honestly love what I do right now.”

Johnson said the type of content she gets to edit and update is a perk that comes with being self-employed.
“I recently have been editing content on a website called FeelRich.com related to New Year’s resolutions,” Johnson said. “My favorite part about this job, though, is being able to write about fitness and nutrition, which is my specialty.”

Johnson won the Outstanding Young Alumni Award in 2006 for her accomplishments as a writer and editor. One of her noted achievements is a biography she wrote on Halle Berry in 2009.

According to Johnson, another reason for winning the award is an article she wrote about the dangers of HIV and AIDS. The article was nominated for the National Association of Black Journalists Award.

In between her jobs, she did a lot of freelance writing for companies including Cooking Light, Essence, Heart & Soul, Honey, Black Issues Book Review and Real Health. These published, freelance works were also reasons for her winning the award.

According to the UW Oshkosh Alumni Relations website, Johnson also worked for Time Inc., before Everyday Health, as a senior associate editor in the strategic communications division. The position she held included her editing publications for clients, like Unilever, Nestle and McDonald’s.

Before moving to New York, Johnson lived in Birmingham, Ala., working as an assistant editor at Cooking Light magazine. She edited content about nutritional recipes people can enjoy.

At first, Johnson said she never wanted to pursue a career in writing and editing, but is happy she did.

“I wanted to go down a totally different path in the journalism field and go into public relations,” Johnson said. “I am glad to say I made the right choice and jumped into writing and editing. I have had so many wonderful editing jobs in the past, and for now, I am happy just to be freelance writing.”