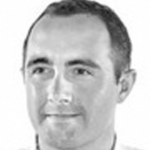 Thinking back to his tenure as a student at UW Oshkosh, Mike Fredrick said his time as a Titan was one of both fun and focus.

“I took advantage of everything I could at UWO, whether it was in the classroom or outside of campus,” Fredrick said. “I worked hard, but I also had a lot of fun, which is what helped me become a well-rounded person and professional.”

In the classroom, he participated in the National Student Advertising Competition, an intensive semester that he said “was as close to being in the real world of an ad agency as a college class can provide. It was constant late nights and I gave up my spring break, but it all paid off in the end when we became the first-ever UWO team to win our division and make it to nationals,” Fredrick explained. He was also the president of a fraternity and eventually president of the campus organization that oversaw all fraternities. “Being in a fraternity was a great way to have fun and have access to countless social opportunities, but it was also like running a business. In fact, many of the management skills I still use today come from my time of being the president of a 60-person fraternity.”

Since graduating from UW Oshkosh in 1997 with a degree in journalism and an advertising emphasis, Fredrick has added a wide array of volunteering and professional opportunities to his resume. He was honored for his accomplishments when he was named an Outstanding Young Alumni in 2011.

“I worked really hard in school and I also worked hard to give back to the UWO ad department after I graduated, so the Outstanding Young Alumni recognition meant the world to me,” he said. “It gave me a sense of pride to be affiliated with UWO, and it still does today.”

Fredrick has frequently assisted with advertising classes at UW Oshkosh to help foster the new generations of advertising professionals.

“I help out at UWO whenever I’m asked,” he said. “I used to work with classes every semester, but many of those professors have moved on. So now I just work with classes whenever the opportunity comes up. I feel like I owe a lot to the education I received at UWO, so I give back any chance that I can.”

Fredrick credits the Journalism Department as a major contributor to his success. “I started out in the business school and was lost,” Fredrick said. “Then I found the advertising major in the Journalism Department and everything fell into place. Every faculty member in the department really cared for the students and went way beyond what I saw other professors doing to help us succeed. In fact, I truly believe Dr. James Tsao is the reason I’m where I’m at today. He pushed us hard to be better than we imagined we could be, yet supported us in ways that showed our success really mattered personally to him. That combination is something I try to mimic in my management style.”

“This is a really crazy and challenging business to be in,” Fredrick said. “You have to stay at the forefront of everything that’s happening in culture, technology and business. The moment you get comfortable is the moment you get passed by. So beyond my day-to-day client work, I stay very active in advertising organizations, read every book and blog about the industry, and write and speak about advertising whenever I can. As you get older in this business and start managing teams, it’s easy to get further and further away from having your hands in the work. If you’re not diligent, you can lose your craft and the reason you got into advertising. That’s one of the reasons I’m committed to working with non-profit organizations. It allows me to continuously practice my craft, while also doing good.”

He has been active in the community, and has volunteered his creative talent to help Adaptive Sportsmen, an organization that helps physically challenged people participate in outdoor activities;  Greyhound Pets of America, a service that helps people adopt retired racing greyhounds; and Guitars for Vets, a group that provides lessons and free instruments to military veterans to help them cope with trauma.

“Pro bono work is one of the most fun and rewarding things an advertising professional can do,” Fredrick said. “The latest organization I was involved with was Generations Against Bullying, which is an amazing anti-bullying organization with its headquarters in Milwaukee. I think everybody should use whatever talent they have to help out organizations that are doing great things for society. They give so much to so many people, and giving just a little bit to them can do wonders for these organizations.”

At STIR, Fredrick said his days do not have a consistent theme to them, outside of how they are “creative.”

“As an executive creative director, I’m responsible for all the creative output of the agency,” Fredrick said. “There is never a ‘normal’ day in an ad agency creative department. One day, I could be shooting a TV commercial on Tybee Island in Georgia and the next day I could be working in the office on a new business pitch. The only thing that is constant from one day to the next is using creativity to solve problems.”

Outside the realm of academics, Fredrick has one distinct memory that stands out about his time at UW Oshkosh: meeting his wife. These types of connections, including many strong and long-lasting connections with professors, made Oshkosh the right choice for him.

“I loved UWO,” Fredrick said. “It was the perfect size to provide an immense amount of opportunity without feeling like you were lost. I think the size also enabled the students and professors to form a bond with each other that wouldn’t be possible in a much larger university. The strong connections I formed with my advertising professors definitely shaped who I ultimately became as an advertising professional.”

When asked what advice he’d give to students and young alumni getting into advertising, he said: “Make sure you love doing this. It’s a really tough career that will force you to work harder than you ever imagined and require you to come up with new ideas every single day of your life. But if you love it, there is literally no better job on the planet.”