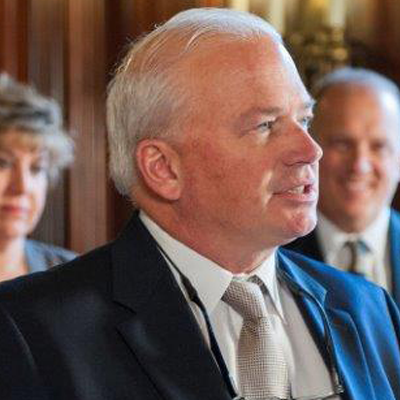 State Sen. Scott Fitzgerald knew he wanted to pursue the business side of journalism before starting his academic career at the University of Wisconsin Oshkosh.

“In high school, I worked at the Watertown Daily Times, and a live radio station in Hartford, Wisconsin, WTKM,” Fitzgerald said.

He said his experiences at the radio station sparked his interest in advertising and public relations as he pursued a journalism degree, graduating in 1985. He went on to work at the Chilton Times Journal, and eventually became publisher for the Dodge County Independent News and Watertown Daily Times, all in Wisconsin.

Along the way he served in leadership roles in the Wisconsin State Legislature and military, earning the Outstanding Young Alumni Award in 1996.

During his time at UWO, Fitzgerald participated in the on-campus Army ROTC program, and received his officer commission upon graduation.

He served as an armor officer, which entails working with light and heavy military tanks in the U.S. Army Reserve.

Every ROTC student has a commissioning ceremony after commencement, which symbolizes the transition from being a cadet to becoming an officer.

“The day after graduation, I went to Armor Basic Officer Leadership Course in Fort Knox, Kentucky,” Fitzgerald said. “I was in the United States Army Reserves for 27 years in Wisconsin.”

Fitzgerald continued his education at the most prestigious military college, the United States Army Command and General Staff College, which could be viewed as a master’s degree in the civilian world.

Fitzgerald retired from the U.S. Army Reserves in 2009 as a lieutenant colonel.

Fitzgerald kicked off his political career in 1992, when he was elected chairman of the Dodge County Republican Party.

“The reason I got into politics in the first place was because of my dad,” Fitzgerald said. “He was a sheriff in Dodge County, WI.”

In 1994, he ran in a republican primary for the state senate and won, and then won the general election a few months later. Since then he has held the same position for 23 years.

“I actually hold two roles, one is the majority leader in the senate,” Fitzgerald said. “and the other is the head of the republican state senate campaign committee.”

Fitzgerald said he has a staff in his legislative office that work with other senators’ staffs, and he works mainly with individual senators, like Minority Leader Jennifer Shilling.

“Madison is a beautiful city and most of my work as majority leader is overseeing senate operations in addition to representing my district,” Fitzgerald said. “From legislation to committee chair assignments to controlling the flow of legislation.”

“My experience attending UW Oshkosh journalism school taught me communication skills that I utilize every day as a legislator. I feel fortunate to have attended such a great school, and in my adult years I have been able to stay involved as an alum,” Fitzgerald said.

“I would encourage students to keep an open mind about their first job after graduating. Even if an opportunity is in a place you never considered living, or if the salary is lower than you expected, do as many things as you can in the first few years out of college. The experience is what matters, and nothing is permanent. After you have a few good references and a few good items on your resume, you can then be more selective about where you want to settle down and look for a more permanent career.”