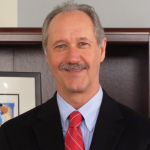 Scott Hassett graduated from the University of Wisconsin Oshkosh with a degree in journalism and took with him the ability to manage, supervise and coordinate into the world of law.

Hassett, who was the Secretary of the Department of Natural Resources during Gov. Jim Doyle’s Administration from 2003-2008, remembers fondly his time in the journalism classroom and at the Advance-Titan, where he worked as a reporter, served as the arts editor and then editor in the fall of 1973.

More than a few times, the then department chairman, Dr. David Lippert, had to field calls from unhappy readers, said Hassett, who relished working 50-hour weeks at the campus paper.

“In those years we did some very controversial and funny things in the Advance-Titan and certainly gave Dave some headaches and put him on the receiving end of some very irate phone calls,” he said. “He nonetheless backed us 100 percent, even in response to potential litigation, and wouldn’t dream of trying to influence or censor anything we wrote. He was an inspiration.”

After his term as editor, Hassett penned a column called “Potshots,” which was born out of a friendly challenge with another A-T reporter. Hassett recounts the origins of his column: “Another friend and writer, Peter Latner, covered the Miss Wisconsin pageant in Oshkosh and made fun of it, comparing it to a meat auction. This drew an angry response from some quarters and numerous irate letters to the editor, which we all found very amusing at the time. I then told Peter that I could write a weekly column that would generate more angry letters than his pageant story, and the rest is history.”

Hassett displayed no fear in his satirical takes on looting after a tornado and racism. He knew he pushed the proverbial envelope when a Potshot column resulted in an angry reader calling in and threatening to kill his dog.

Years later, Hassett’s Potshot columns still come up in conversation. In 2010, various faculty members, who were at Oshkosh in 1974 sponsored a fundraiser for his eventual unsuccessful bid to be Attorney General. By way of introducing Hassett to the attendees, his former faculty members discussed the columns he had written some 35 years earlier. “Some of the columns were reprinted in other state college newspapers and I would hear about them for years,” Hassett said.

After graduating from UWO in 1974, Hassett worked at the Jefferson Banner, a weekly paper, in Jefferson, Wisconsin for two years as the managing editor and primary reporter. Hassett’s dad, Paul Hassett, a frequent guest speaker in the journalism department, touted the value of working at a small town weekly, especially for young reporters. Paul Hassett ran the Dunn County News in the 1950s before he became Gov. Warren Knowles chief of staff in the 1960s.

“As I found out later at the Jefferson Banner that (at a small weekly) you covered everything and gained a broad base of knowledge, such as school board, city council, county board, police and fire, sports and feature writing,” Hassett said. “At a daily paper you get slotted into one or two distinct areas.”

Hassett aimed for a full-time job at the Capital Times, but a contentious newspaper strike in 1978 derailed his plans. “I wasn’t going to go in as a strikebreaker and thought it was a good time to go to law school,” he said. “At Rutgers, I used my journalism experience to start a student newspaper, from scratch, which became very popular with students and faculty.”

After graduating from Rutgers Law School, Hassett was still interested in returning to journalism, but this time the economy got in the way.

“The hiring freeze was on because the economy was in bad shape at a lot of newspapers.  I could have got some jobs in some areas like business, but I really wasn’t interested,” Hassett said. “I worked as a law clerk in Madison at Lawton and Cates and they wanted me to come back and try being a lawyer.”

Hassett credits his success as an attorney to the skills he learned in his courses at UWO and the hands-on training he received working at the Advance-Titan. As a result, he did trial work for 25 years in both criminal and civil litigation.“They liked my writing skills, putting together fact situations and briefs. They had me doing a lot of that and, of course, I had the training and discipline from doing that working at a newspaper.”

Hassett won the Distinguished Alumni Award from UWO in 2005. In a nomination letter for the award, former Gov. Jim Doyle praised UWO as an integral part of Hassett’s life. “Scott Hassett’s degree from UW Oshkosh provided a strong foundation for him in the journalism field and further enhance his future educational and career opportunities,” Doyle wrote.

In another nominating letter, Gary Coll, professor emeritus of the journalism department, wrote: “He made his mark at the university as a journalism major, and editor of the Advance-Titan campus newspaper. He carried his newspaper career forward to the Jefferson Banner, where he was recognized statewide for his investigative reports on conditions in agriculture migrant camps and on groundwater pollution.”

Hassett said the lessons learned from working at the A-T resonated well past his time at UWO. “The most important thing I took from it was the experience at the newspaper, learning to perform under pressure and on deadline, with a lot of responsibility for a young person supervising scores of employees,” he said. “This paid off in future newspaper and legal work, and at the DNR when I had 2,500 employees.”