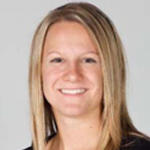 Vanessa (Virbitsky) Zink is a dreamer, a doer and a winner. Zink graduated from the University of Wisconsin Oshkosh in 2008 and won the Outstanding Young Alumni Award in 2012. She described her four years at UW Oshkosh in a simple manner.

“In a word, amazing,” she said. “I was an out-of-state student [from Pennsylvania], and I took advantage of a lot of what UWO had to offer. I competed on both the gymnastics and track teams and double majored in journalism and political science.”

Her presence was not only felt on the gymnastics floor, but also on the track. She was a member of the UW Oshkosh women’s track and field team. The Titans won back-to-back track and field NCAA Division III National Championships in 2006 and 2007. Zink competed in hurdles and relay events.

In a nominating letter for the Outstanding Young Alumni Award, former UW Oshkosh professor Julie K. Henderson wrote: “While at UW Oshkosh, Vanessa was my student, advisee and a member of the Public Relations Student Society of America. During her college years, she continued to pursue excellence in her chosen professional field by working as a reporter for the Advance-Titan and the Oshkosh Northwestern and was a writer in the Integrated Marketing Communications office.”

Zink was also involved with the study abroad program in England with Dr. Timothy Gleason. “I have really vivid memories from our trip to Cambridge with Professor Gleason,” she said. “Seems strange coming from a lifelong athlete, but visiting Arsenal’s stadium and covering a cricket match made me want to pursue a career specifically in sports journalism.”

Zink’s strong involvement on campus did not hinder her performance within the classroom. She maintained a 3.61 cumulative grade point average during her time at UW Oshkosh. She was also selected as the commencement speaker for the 2008 UW Oshkosh graduation ceremony.

In another nominating letter, UW Oshkosh head women’s gymnastics coach Lauren Karnitz marveled over her former athlete’s mental strength. “[Zink’s] thought process is always functioning three steps ahead of all who are around her and she has the strength and confidence to start, develop and complete a huge task without needing anyone to hold her hand or guide her along the way.”

Since graduating from UW Oshkosh, Zink landed her first job as a graduate assistant gymnastics coach at Ball State University while working towards her master’s degree in public relations with an emphasis in sport communication.

“It was fun to extend my time in the college atmosphere, but it helped solidify my desire to break away from coaching and work as a communications professional,” Zink said.

In 2009, she was offered a six-month communications internship at the U.S. Olympic Committee.

“Vanessa has performed at a much higher level than her age and title would indicate, with a dedication and passion that raise her above her peers,” Lindsay Hogan, a senior director of marketing communications for the USOC, wrote in an nominating letter. “She has demonstrated that she is smart beyond her years and capable well beyond her title.”

Zink took a full-time position with the USOC in 2010 where she took on manger-level responsibilities at her first Olympic games. A major responsibility she encountered was coordinating athlete interviews for NBC’s Today Show.

In 2011, she implemented the USOC’s first youth sport grants, which met a number of U.S. Olympic Committee objectives while providing $100,000 to deserving non-profit member organizations.

Her responsibilities include “raising awareness for each championship by securing earned media coverage, helping support ticket and merchandise sales,” Zink said. “I write messaging and speaking points for executives and shape the public narrative for each of our Open championships.”

Zink currently resides in Bloomfield, New Jersey and is proud to have attended UW Oshkosh, and credits her journalism degree for helping her think more critically.

“From learning the basics of written and visual storytelling to being drilled on how to synthesize information from a variety of sources for a compelling, timely and accurate story, the skills I learned in the classroom were quickly applied to real life scenarios when interviewing someone for an Advance-Titan feature, creating a campaign for PRSSA or designing a newsletter for the UW Oshkosh athletic department,” she said. “The real-life practical application of that knowledge was key to forging those foundational skills that are continuing to serve me well today.”

No matter where life takes her, Zink thinks fondly of her Wisconsin roots. “I’m very proud to have attended UWO, and in particular, the journalism program. The UWO Journalism Department taught me the fundamentals of the industry, but, more importantly, the instructors and extracurricular programs gave me the confidence to turn those skills into a successful career,” she said. “I love telling my college journey to colleagues and friends.”