The chapter gives students an opportunity to associate with peers and professionals and to share knowledge of public relations opportunities and standards through guest speakers, workshops and agency tours. The organization participates in the annual NODAC competition to promote organ donation awareness. Any student with an interest in public relations may become a member.

To stay informed about upcoming meetings, please join our list. 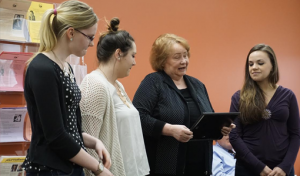 The name of the campus PRSSA chapter has officially been changed to the Dr. Julie Henderson Public Relations Student Society of America Chapter at the University of Wisconsin Oshkosh. Henderson has been the PRSSA faculty adviser since 1993 until her retirement in 2015.

Since 1993, chapter teams have earned 23 national competition awards, plus numerous other chapter and individual recognitions at the national level.

Henderson, a professor for the Department of Journalism, also served as PRSSA National Faculty Adviser from 2009-2011. Through her efforts, the campus public relations program was certified through the Certification in Education for Public Relations in 2011, making it the only CEPR program in Wisconsin.