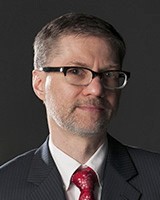 Professor T.R. Gleason earned a Ph.D. in Communication Studies from Bowling Green State University, a M.A. in Journalism from The Ohio State University, and a B.S. in Studio Art from SUNY Brockport. Gleason’s doctoral dissertation was about developing a photojournalism historiography.

He joined the faculty in 2000 and teaches media photography, visual media, and several media studies courses. He also led the Travel and Documentary Photography study abroad program in England and is the adviser to the UWO Photo Club.

Gleason researches forms of visual communication storytelling and media history. His work has been published in a variety of publications, including the Howard Journal of Communications, Visual Communication Quarterly, and Asian Cinema.

His research also includes the Katyn massacre of Polish officers by the Soviet Union during World War II. An article, Decade of Deceit, was published in Journalism History.

He has worked as a newspaper photojournalist and won three Ohio Associated Press awards. He also published documentary photographs in Timbuktu: An International Journal Based in Wales, LENSCRATCH, and f-stop magazine, as well as worked for WBGU-TV as an associate producer of News Six.