Who is Ronald E. McNair? 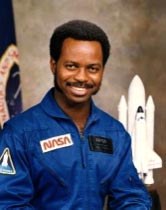 The McNair Post-Baccalaureate Achievement Program, commonly referred to as the McNair Scholars Program, was named in honor of the late Ronald E. McNair, who, as an African American born in the segregated South in 1950, had to overcome tremendous obstacles in order to pursue his higher education. A now infamous story recounts how, in his home town of Lake City, South Carolina, a librarian called the police on the nine-year old Ronald when he attempted to check out books from the local public library. McNair went on not only to graduate magna cum laude from North Carolina A&T State University in 1971, but also to receive a Ph.D. in physics from MIT in 1976, and today that same library bears Ronald E. McNair’s name as a testament to how far we have come. McNair was already an accomplished physicist and astronaut when he qualified for the coveted position as mission specialist for the Space Shuttle Challenger. Tragically, he perished in the 1986 mission, the worst disaster in the history of NASA. McNair was only 36 years old. Posthumously, he was awarded the Congressional Space Medal of Honor, and his legacy lives on, thanks to members of Congress who, by authorizing generous funding for the program that now bears his name, made it possible for thousands of students from disadvantaged backgrounds to become scholars.”