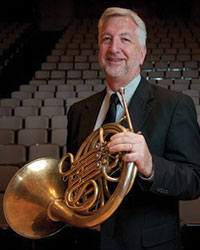 In demand as a horn player throughout the state of Wisconsin, Bruce Atwell has been Professor of horn at the University of Wisconsin Oshkosh since 1998. Dr. Atwell also holds positions with the Fox Valley Symphony and the Milwaukee Ballet Orchestra. Dr. Atwell lived in Cincinnati prior to his appointment and was Principal Horn of the Cincinnati Ballet Orchestra. Dr. Atwell has also held positions with the Florida Symphony Orchestra and the Hong Kong Philharmonic. While he was Principal Horn with the Florida Symphony he was also Visiting Professor of Horn at the University of Florida.

He was acting Fourth Horn with the Philadelphia Orchestra for their 1997 European Tour and in concerts at Carnegie Hall and in Philadelphia. He also performed on an all Wagner CD for Deutsche Grammaphone with Christian Thielemann conducting.

Dr. Atwell has also performed with the Cincinnati Symphony, Indianapolis Symphony, Milwaukee Symphony, and Cincinnati Chamber orchestra. He has had solo appearances with the Orlando Philharmonic, the Winter Park Bach Festival, the Ensemble for Eighteenth Century Music, the Oshkosh Symphony, and the Fox Valley Symphony, the Green Bay Symphony, and the St. Petersburg Chamber Philharmonic (Russia). His recording “Baroque Music for Horn and Strings” with the St. Petersburg Chamber Philharmonic was released in 2012 and has received critical acclaim.  In the summer he performs with the Movere Wind Quintet and Praetorius Brass and is a faculty member at Lutheran Summer Music.