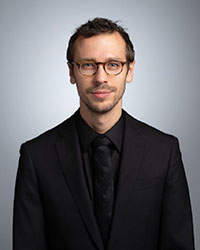 Dylan Thomas Chmura-Moore, D.M.A., is Associate Professor of Music at University of Wisconsin Oshkosh where he is director of orchestras. Dylan is also Music Director of the Manitowoc Symphony Orchestra. He is the author of "A Practical Reference Manual of Tempos for Musicians," published by Potenza Music. Previously, he was director of the Ripon College Symphony Orchestra. In addition, Dylan has conducted the Oshkosh Symphony Orchestra and ensembles of Harvard University, New England Conservatory, Longy School of Music, Northeastern University, Baldwin-Wallace College Conservatory of Music, and other groups such as Callithumpian Consort and Shivaree Ensemble. Some of the conductors with whom Dylan has had the opportunity to intimately observe and work are Pierre Boulez, Robert Page, Larry Rachleff, Gunther Schuller, Joseph Silverstein, and Benjamin Zander.

Dylan is also professor of trombone at UW Oshkosh, former instructor of trombone and euphonium at Holy Family College, and is an active solo, chamber, and orchestral musician having recently performed with Madison Symphony Orchestra and Wisconsin Chamber Orchestra. Notable international appearances include performances at the Internationale Ferienkurse Fur Neue Musik in Darmstadt, Germany, and the Lucerne Festival in Lucerne, Switzerland. Dylan can be heard on Mode, Summit, EuroArts, Albany, TZADIK, and the Accentus record label. His solo album, Flag, was released by Peer 2 Records.

Dylan was awarded the Doctor of Musical Arts degree from University of Wisconsin-Madison. He was a Paul Collins Wisconsin Distinguished Graduate Fellow at the university and focused his studies on the research and performance of newly composed music. Previously, Dylan studied at New England Conservatory in Boston, Massachusetts where he received two Master of Music degrees, one in trombone and the other in conducting. Upon graduation, Dylan was awarded academic honors, a distinction in performance, and the Gunther Schuller Medal, the highest honor awarded by the conservatory. Dylan received the Bachelor of Music degree from Baldwin-Wallace College Conservatory of Music.