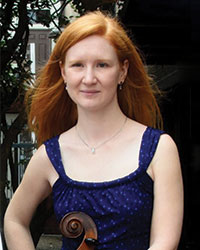 Dr. Katherine Decker has enthralled audiences across the country with her “positively delightful” performances” and “intense concentration and confidence” (Fanfare). She made her solo debut with the Valparaiso University Symphony Orchestra in 2001 and since then, has performed extensively as a solo and chamber artist. Since 2011, Dr. Decker has been a member of the award-winning ensemble, enhakē. This contemporary classical chamber music ensemble has been awarded numerous prizes such as the Grand Prize at the Yellow Springs Chamber Music Competition (2009), and First Prize at the International Chamber Music Ensemble Competition (2008). They have held residencies at the OK Mozart festival (2008-2013), Texas A & M University, University of Costa Rica, Bach Institute of Music (San Jose, Costa Rica), National Superior Institute of Music (Moravia, Costa Rica), Universidade Federal do Rio Grande do Sul (Porto Alegre, Brasil), Federal University of Goias (Brasil), Universidade de Brasilia, Utah State University, and Mesa State College in addition to performances at the Pan-Music Festival at the Seoul Arts Center (South Korea), on the James A. Sclater Chamber Music Series (Mississippi College), the Tallahassee-based Artist Series, the University of North Carolina-Chapel Hill Newman Series, the Appleton Museum Chamber Series (Ocala, FL), and the Friday Musicale concert series (Jacksonville, FL) to name a few.

With enhakē, Dr. Katherine Decker has recently released Preparense: the Piazzolla Project on the MSR Classical label to critical acclaim. Before her time with enhakē, Dr. Decker was a member of the Eppes String Quartet with whom she performed throughout the United States and as a part of the Promising Artists of the 21st Century series in Costa Rica. Dr. Decker has also participated in the Texas Music Festival (Quartet Artist in Residence), the International Festival and Institute at Round Top, Meadowmount School of Music, and the Miami Quartet’s Advanced String Quartet Seminar. Additionally she has performed with numerous orchestras including the Tallahassee Symphony Orchestra, the Columbus Symphony, the Elgin Symphony, and the Albany Symphony Orchestra. Dr. Decker received her MM and DMA from the Florida State University and has studied under Paul Olefsky and Gregory Sauer. Her current projects include a new CD of Piano Trio music entitled, She Persisted, featuring works by living female composers. She was the Assistant Professor of Low Strings at the University of Texas Rio Grande Valley from 2012-2017. She is now faculty for Music in the Mountains and serves as Assistant Professor of Cello at the University of Wisconsin Oshkosh.