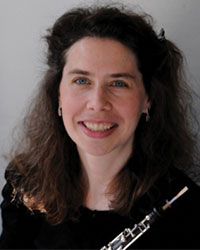 Andrea Gross Hixon began teaching oboe at the University of Wisconsin Oshkosh in the fall of 2012. Dr. Hixon is a member of the Madison Symphony Orchestra and was principal oboist of the Green Bay Symphony for its final ten years. For the past two summers, she has played with the orchestra of the New Hampshire Music Festival in Plymouth, NH, and has also performed in the festival’s Music in the Mountains chamber music series. Additionally, Dr. Hixon has been a member of the Woodstock/Midwest Mozart Festival Orchestra in Woodstock, Illinois for the past eleven years. She also serves on the faculties of St. Norbert College (De Pere, WI) as well as the University of Wisconsin-Green Bay, and has taught oboe at the University of Memphis and at Lawrence University. She is a frequent performer with the Milwaukee Symphony and Wisconsin Chamber Orchestra, among other groups.

Dr. Hixon has toured and recorded with the Moscow Chamber Orchestra with concerts in France, Italy and the United States, including performances in Carnegie Hall and Avery Fisher Hall. She was principal oboist of the Eastman Wind Ensemble for two consecutive tours to Japan and Taiwan, and played in the summer opera orchestra for the Schlossfestspiele in Heidelberg, Germany. She has also toured with the American-Russian Young Artists Orchestra, performing in Lincoln Center’s Alice Tully Hall, the Mariinsky Theater in St. Petersburg, the Great Hall of the Moscow Conservatory, Smetana Hall in Prague, Czech Republic, and at the White Nights Festival in St. Petersburg, Russia.