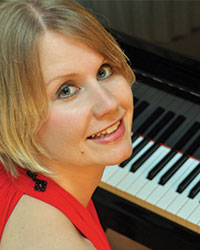 Kirstin Ihde is currently Associate Professor of Piano at the University of Wisconsin-Oshkosh, where she teaches class piano and collaborates frequently with both faculty and students in a variety of performance settings. Her prior appointments include teaching class piano at Edgewood College and class piano and accompanying at the University of Northern Iowa. She is featured on two recently-released recordings. The first, La Loba, a Summit Records release, is the culmination of a research project done in collaboration with Katie Johnson-Webb, horn. It features four duos commissioned by and/or dedicated to the famous Norwegian hornist Froydis ree Wekre. The second, Day and Night: Modern Flute and Piano Duos by Women Composers, released by Albany Records, is her second collaboration with Erin K. Murphy, flute. The recording includes duos by women composers from the 20th century to the present.

Before joining the faculty at UW-Oshkosh, Kirstin served as a pianist for both Madison Opera and Fresco Opera. An active collaborator with a passion for art song, she has participated in recent years in the Baldwin-Wallace Art Song Festival and Songfest, where she worked with world-renowned artists Graham Johnson, Martin Katz, Roger Vignoles, Warren Jones, John Musto, Libby Larsen, Gidon Saks, and Christine Brewer. Kirstin also collaborates extensively with many instrumentalists, and she has performed with such notable names as Rex Richardson, Tom Hooten, Allen Vizzutti, Oystein Baadsvik, and John Thorne. She is a past winner of the Irving Shain Woodwind and Piano Duo Competition.

Kirstin’s research includes the unpublished songs of the American composer John Duke in collaboration with the late soprano Karen Bishop. She and Karen can be heard on their recording Songmaking: A Collection of Unpublished Songs by John Duke. Kirstin is presently finishing an edition of these 25 songs for eventual publication. Other recording projects include collaboration with euphonium player Matthew Mireles on his solo album Prometheus and with tubist Stephanie Frye on her album Compositions for Tuba by Women Composers. Kirstin also completed a research project with flutist Erin K. Murphy, which involved creating a published edition and a recording of Suitte d’un Goût Étranger, a selection of character pieces by Marin Marais. The new edition includes Erin’s flute transcriptions as well as Kirstin’s realization of the continuo part.

When Kirstin is not busy with her academic year, she serves as the pianist for the Interlochen Trumpet Institute. In addition, Kirstin maintains a private studio where she teaches students of all ages and abilities and performs frequently as a freelance collaborative pianist. For more information about Kirstin, please visit her website: kirstinihde.com.