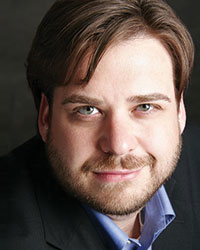 This past summer Dr. Krueger presented at the National Association of Teachers of Singing (NATS) Conference in Boston, MA and was a featured artist on the Florentine Opera’s At the Lake concert series. He has recently appeared a soloist with the Oshkosh Chamber Singers and the South Shore Choral, in the Florentine Opera’s production of La Traviata, sung with Milwaukee’s Present Music in a concert of Pulitzer Prize winning composer Caroline Shaw’s music, and in a concert reading of the new musical Victory for Victoria with Milwaukee Opera Theatre.

In the summer of 2013, Dr. Krueger  participated in the Vancouver International Song Institute, performing repertoire by Gustav Mahler and Richard Strauss. In 2012 he was the NATS SongFest Fellowship recipient   and performed a recital of John Musto’s song cycle Book of Uncommon Prayer at SongFest in Los Angeles.

During the summer of 2009 he made his International debut with a concert tour of Indonesia with the Swara Sonora Trio. As a member of the dynamic Swara Sonora Trio, he commissioned and performed the world premiere of Ananda Sukarlan’s song cycle, “Love & Variations.” He has also performed with the Lyric Opera of Chicago Chorus, Madison Bach Musicians, Arizona Opera, the Santa Fe Desert Chorale, the Tucson Chamber Artists, L’opera Piccola in Chicago, Opera Southwest, Chicago Chamber Opera, and appeared in two productions with the Santa Fe Opera Showcase.

Dr. Krueger can be heard on recordings by the Santa Fe Desert Chorale (Clarion) and the world premiere recording of Robert’s Aldridge’s opera Elmer Gantry (Naxos). In addition to his busy performance schedule, Mr. Krueger worked for five years as an Opera Artist in Tucson United School District’s Opening Minds Through the Arts (OMA) program, a nationally-recognized arts integration program.