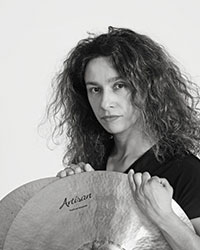 Marisol continues to play percussion in many styles and with many ensembles, educating students through school music workshops on steel drum and percussion.