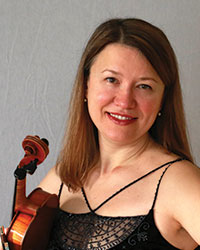 Yuliya Smead was born in Ternopil, Ukraine. She began her violin studies at the age of 8 in a specialized music school. As her love of the violin grew, she realized she wanted to make this her career. After passing a rigorous selection process she entered the Ternopil Music College, where she completed her Bachelor’s Degree in Violin Performance and Pedagogy, graduating cum laude, and then attended the M. Lysenko National Academy of Music and completed her Master’s in Violin Performance and Pedagogy, again graduating cum laude. She completed her Doctorate in Violin Performance and Pedagogy from the same institution, with a full scholarship. Yuliya is a two time winner of the Ternopil State Young Talent Competition and took second place at Gitaralia Poland. As a performer, prior to coming to the United States, she was a concertmaster in the Lviv State Chamber Orchestra Trembita, which toured extensively in Germany, Poland, and Ukraine, and was concertmaster of the Leopolis Orchestra which performed regularly in France, Belgium, Germany and Poland. Since moving to the USA in 1999 she became concertmaster of the Oshkosh Symphony Orchestra in 2001, concertmaster of the Fox Valley Symphony in 2007 and assistant concertmaster of the Green Bay Symphony Orchestra in 2001.

As an orchestral member she has shared the stage with such notable performers as Joshua Bell, Maxim Vengerov, Robert Spano, as well as many others. She is a frequent performer at the Weidner Center and the Fox Valley Performing Arts Center. She was also a first violin in the first Ukrainian Chamber Ensemble of Modern Music Cluster, which was a frequent guest at the well known international music festival, Kontrasty. The Cluster also performed in Holland, Poland, Latvia, and throughout Ukraine. She is a member of the North Shore quartet and the Fox Valley String Quartet, as well as being an organizer and a performer with the Concertmaster Series through the Fox Valley Symphony. Yuliya also performs at the Paine Arts Center with the Oshkosh Symphony Chamber Group. Her performing includes a live public broadcast, “Live from the Chazen,” playing Cesar Franck’s Piano Quintet with Raffi Besalyan and the North Shore Quartet. She has appeared as a soloist with Lviv State Philharmonic Orchestra, Leopolis  Orchestra, Oshkosh Symphony Orchestra, Fox Valley Symphony, and Manitowoc  Symphony Orchestra. As an educator, Yuliya has over 20 years of teaching experience, 15 of which she has been teaching at the Lawrence Academy of Music. She has been a clinician and has presented Master Classes at regional high schools, and has coached the Lawrence Chamber Music Odyssey and local youth symphonies.