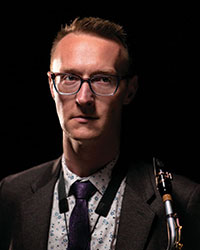 Saxophonist Drew Whiting has established himself as a champion of new and experimental music, specializing in performing works of the 20th and 21st centuries in solo, chamber, and electroacoustic settings. Drew is described as having “superb musicianship” (The Saxophonist), “remarkable versatility” (Computer Music Journal), and is a “superb advocate of the music he champions” (Fanfare Magazine). Drew was recently the featured performer at the Electronic Music Midwest Festival in 2019, where his performances where described as “exquisite and emotive… manag[ing] everything with aplomb” (diakcritical.com).

Drew has also been a featured artist for the Turn Up Online Festival and presented the first ever Performer Curated Concert at the 2017 SEAMUS Conference. Additionally he has performed at the Toronto International Electroacoustic Symposium, Ball State University Festival of New Music, Third Practice Festival, SPLICE Festival and Institute, North American Saxophone Alliance Conferences, and the International Navy Band Saxophone Symposium. Drew has worked closely with composers such as Alexis Bacon, Jeff Herriott, Betsy Jolas, Erik Lund, Ed Martin, John Mayrose, and Pauline Oliveros, and has premiered over thirty works by established and emerging composers.

His debut solo album, In Lights Starkly Different, is available on Innova Recordings featuring recently composed works for saxophone and electronics and has been met with acclaim. Critics have said, “What perhaps most recommends In Lights Starkly Different—aside from the pleasures afforded by Whiting’s prowess on soprano, alto, tenor, and baritone saxes—is its variety” (Textura), and “This is contemporary music at its best” (The Whole Note). Drew can also be heard on the NAXOS, Petrichor, and Centaur labels.

In addition to his new music pursuits, Drew regularly performs the standard concert saxophone repertoire, transcriptions of borrowed works, as well as commercial music. Drew has performed with such diverse artists as dancer Kristie Simson, trombonist Jim Pugh, and the iconic Four Tops and The Temptations. He has also recorded music for the Hallmark and Lifetime television networks. Currently, he performs with a variety of ensembles including the Water City Jazz Orchestra, Wisconsin Chamber Orchestra, and is baritone saxophonist for the Coalescent Quartet.

Drew is a dedicated, passionate, and vibrant educator. As a Vandoren Artist-Clinician, Dr. Whiting has presented clinics at middle and high schools across Wisconsin, as well as universities across the nation. He is a frequent adjudicator for Wisconsin School Music Associations Solo and Ensemble festivals. In 2017,  Drew founded and hosted the Wisconsin Saxophone Summit, an annual celebration of saxophone artistry that is open to saxophonists of all ages and abilities. He has also presented masterclasses at Grand Valley State University, Illinois State University, Lawrence Conservatory, Ohio State University, Oklahoma State University, and the University of Memphis. Dr. Whiting serves as Associate Professor of Music at the University of Wisconsin Oshkosh where he teaches courses in aural skills, saxophone, chamber music, and co-directs the experimental music ensemble.

Drew received his Bachelors and Masters of Music degrees from the Michigan State University College of Music where he studied with Joseph Lulloff. He earned the Doctor of Musical Arts degree at the University of Illinois Urbana-Champaign where he studied with Debra Richtmeyer. Drew is a proud Yamaha Performing Artist and Vandoren Artist-Clinician, performing exclusively on Yamaha saxophones and Vandoren woodwind products.