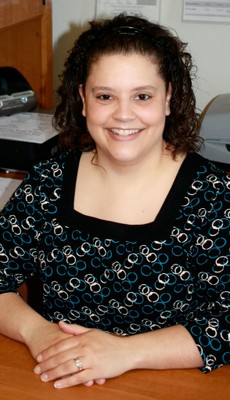 Angelee Hammond left the University of Wisconsin Oshkosh during her senior year when she got married and bought her first home. Due to new financial responsibilities, her priorities changed, and education fell to the bottom of her list.

“I decided to work full time and put my education on hold. Although I wanted to return to complete my education, I kept postponing it year after year because my bills never went away,” she said.

As time passed, Hammond says she came up with more and more excuses. For example, she was afraid of feeling awkward in a classroom with younger students.

“I felt I needed to do something, but those excuses kept coming,” she said.

Finally, in 2008, Hammond decided to come back to UW Oshkosh. She contacted the Admissions Office, which got her in touch with the Graduation Project, which works with returning students who are close to graduating by giving them a step-by-step academic plan and connecting them with the right University offices and departments.

Hammond’s husband encouraged her to return to the University.

“Every month when we paid my student loan bills, my husband and I talked about the fact that I was making payments for a degree that was never attained,” she said.

Hammond, who received a bachelor’s degree in human services leadership in fall 2008, also attributes her return to higher education to her mother.

“She works at UW Oshkosh, and she kept on my case,” Hammond said. “We have a wonderful relationship and had many discussions about my education. She was my biggest supporter, and I wanted to make her proud.”

Hammond says she recommends that students who are in her situation — students who stopped out before completing their degree — consider returning because they never really know the situation they will be in until they come back.

“I thought I was going to have to retake a lot of classes because it had been so long, but they helped me work with different departments, and I didn’t have to,” she said. “You can always say ‘next year,’ but a college degree can open up so many doors.”

“I no longer feel guilty about paying student loans. I feel a sense of accomplishment and pride. Completing my degree provided me with information and skills that I’ll use for the rest of my life,” she said.