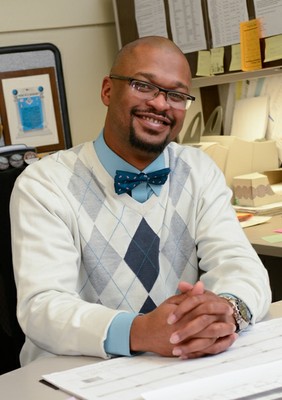 From the first time he stepped onto the UW Oshkosh campus in 1992, Terrance Smith has been known as Timber. After working towards his bachelor’s degree on and off for nearly 20 years, Smith still keeps his nickname of Timber, though he said only he knows the meaning behind his nickname. He graduated in 2011 and now serves as an admissions counselor at UWO.

“Every day when I drive on to campus I get out of my car and smile,” Smith said. “It’s just an awesome place to work.”

Throughout his 19-year journey to finish his bachelor’s degree in social work, Smith always attended UW Oshkosh because he said it felt like home.

“It’s the most wonderful feeling to give back through my position as an admissions counselor at UW Oshkosh,” Smith said.

Smith took a detour from his schooling when he joined the Army Reserves. When he came back to UW Oshkosh, he had a child and needed to work full-time.

Smith had 130 credits and was close to graduating but had a hard time finding classes that fit his schedule. He turned to the Graduation Project staff to help him find the courses he needed.

“You really need someone to help you maneuver through the system,” Smith said. “The Graduation Project really homes in on those who only have a few more classes to finish, and that’s the situation I was in.”

The Graduation Project helps students who have 75 credits or more from UW Oshkosh come back after at least one semester away from taking classes. Through a variety of evening, weekend and online classes, the Graduation Project staff in the Division of Lifelong Learning and Community Engagement helps returning students finish their degrees.

“The great thing about college nowadays is there are so many alternative ways to find the means to the end,” Smith said. “I would love to encourage anyone out there who gave up, but is so close to graduating, to go back and see what’s offered now.”

Smith said he wouldn’t have known how to finish his bachelor’s degree without the help he received from the Graduation Project staff or the encouragement his wife and daughter gave him.

“I had a great support system,” Smith said. “My wife was an amazing support, and my daughter was probably my biggest motivator to finish my degree. How do you tell your kids they have to go to school when you don’t complete it yourself?”

Smith is now pursuing a master’s degree in educational leadership with hopes of advancing his career within the higher education industry.

“I heard about people who say they love their jobs, but I never believed it. They said if you get an education and go for something you are passionate about, you’ll find something that you love,” Smith said. “I believe it now. I’m the happiest I’ve ever been.”

For information on how to come back to college at UW Oshkosh, contact Laurie Ahrens, Graduation Project coordinator at (920) 424-4474.