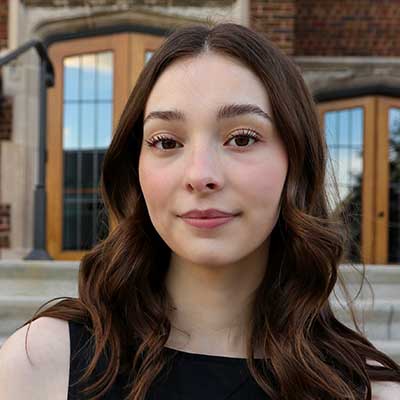 I will be performing three French pieces selected from my senior vocal recital repertoire. I will begin with “L’absent,” written by Gounod, followed by “L’heure Exquise,” written by Hahn, and “Villanelle,” written by Berlioz. I chose these pieces because the French language is my favorite language to sing as it follows lush lines and poetic meaning. Through my performance, I wish to highlight the beauty of these pieces as each translates to describe an element of nature and new beginnings. Before my performance, I will start with a brief introduction to the composers and an analysis of the texts and musical setting.

Charles-François Gounod was a French composer recognized for his writing style of elegance and graceful melodies. Gounod wrote both the poetry and music of “L’absent.” The piece was composed for his wife to apologize for getting involved with another woman. Listen for the melodic lines in the voice and beautiful piano as Gounod expresses his remorse and himself as the absent one through the image of the night.

Reynaldo Hahn was known for writing many incidental music compositions, ballets, operas, and operettas but is best known for his songs. “L’heure Exquise” describes the beauty of the night, calling it the exquisite hour. Notice the legato lines and reaching notes to the moon.

Hector Berlioz is remembered for his compositions which embody romantic ideals and express his imagination. “Villanelle” illustrates two lovers walking through the woods and the picturesque scenes they notice together.

The musical setting of each piece presents aspects of nature connecting to new beginnings of love and loss. I hope you can feel these emotions through my performance and appreciate the work of these French composers.