“Sulfide mineralization in NE Wisconsin at the Ordovician-Silurian boundary: implications for groundwater and evolution of the Michigan Basin” 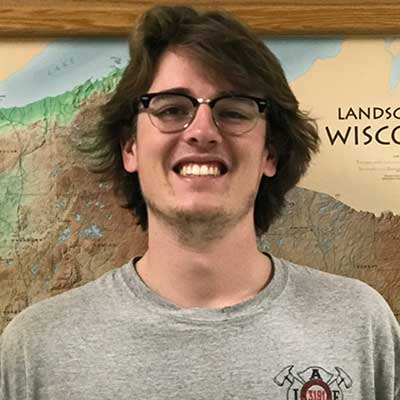 Sulfide minerals can release heavy metals elements such as copper, arsenic, and others into groundwater. Sulfide mineralization is widespread in the rocks of eastern Wisconsin but can be concentrated at the Ordovician- Silurian boundary, especially near Green Bay. Sulfide mineralization occurred in multiple events beginning in the depositional environment (about 450 million years ago), and into the middle to Late Paleozoic (400 to 300 million years ago) after the sediments were buried. Pyrite is the most abundant sulfide mineral and mostly formed from hydrothermal fluids that carried metals, which later precipitated in fractures and replaced dolomite and phosphate minerals. We identified multiple generation so of sulfide minerals along with the relative timing of their formation using a petrographic microscope. We used X-Ray diffraction to confirm the mineral compositions and their relative abundances. Understanding the composition, distribution, and timing of sulfide mineralization is important because alteration of these minerals leads to release of arsenic and other metals to groundwater.