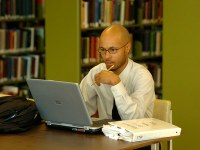 When a reported 65 percent of the Milwaukee Public Schools’ teachers get their degrees from the University of Wisconsin Milwaukee, collaboration between the two is expected.

The Teachers for a New Era program is an example of a collaboration aimed at improving education in MPS by improving the quality of the teachers that graduate from UWM. The program and others like it seek to improve student achievement by creating strong, effective education programs in universities.

English secondary education major Leviathan Whitfield thought about this question when he applied for the UW Oshkosh McNair Scholars program. A $220,000 grant from the U.S. Department of Education funds the program and gives 13 undergraduate students a chance to work with a faculty mentor on a significant research project and prepares them for doctoral study.

Whitfield, who will pursue a master’s degree in Urban Education, is working with faculty mentor and assistant professor Suzanne Fondrie. She was his first education professor and told him about the McNair Scholars program. Fondrie will help Whitfield as he researches Teachers for a New Era.

“As a future educator, I’m naturally concerned with teacher quality,” Whitfield said. “The program that I’m doing research on, Teachers for a New Era, has as its primary goal improving teacher quality. My research has taken me into the hard, complicated process of institutional reform.”

Selecting a research topic was easy for Whitfield because he said that many of his classes have covered ways to improve learning in districts like that of MPS. He’s heard about what education could and should be, and about the wonderful ideas for problem solving enough that Whitfield described his topic as a natural extension of something that interests him.

Whitfield said his participation as a McNair Scholar has helped him map out his goals, which are teaching in MPS and getting his master’s from UWM.

He also said he will be able to market himself better with the research he’s doing. But that’s not the only reason he got involved. Whitfield said social justice played a part because when he sees a district with problems, he wants to be part of the solution.

“But there are cultural things, too,” Whitfield said. “I feel that, as a person of color, I have a responsibility to provide a positive role model and an obligation to use my talents in a place that they’ll matter most. Milwaukee Public School system is that place.”

Whitfield has advice for anyone considering involvement in student research. “I would say that if you’re going to put all of that time and energy into a research project that you should definitely try to get it published somewhere,” he said. “And that somewhere should be Oshkosh Scholar.”

As a UW Oshkosh undergraduate student, Leviathan Whitfield was a student editor for Oshkosh Scholar (he was published in Volume II), and a McNair Scholar. He is currently enrolled in UW Milwaukee’s Cultural Foundations of Education master’s degree program. The research that he will be doing at UW Milwaukee will be an extension of his UW Oshkosh research. In addition, he is working as a Title 1 teacher for Catapult Learning and as a substitute teacher for Milwaukee Public Schools. “Patience and diligence have both helped me to move toward my career goals,” he said. “My experiences at UWO provided me with the tools to be successful. To say that I am grateful for my time at UWO would be an understatement. The lessons learned have helped me to realize my personal and professional goals.”