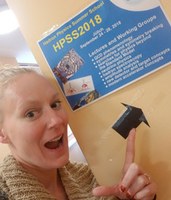 On September 23, 2018, I landed in Dusseldorf, Germany for one of the most thrilling experiences I could have imagined.  I spent a full week at the Hadron Physics Summer School (HPSS) held in Julich, Germany.  The Hadron Physics Summer School is a held every two years in Europe.  It is a collaboration organized by scientists from the Institut für Kernphysik, Forschungszentrum Jülich, and the Universities Aachen, Bonn, Bochum, Düsseldorf and Giessen.  The school biannually accepts roughly 60 graduate and a few advanced undergraduate students from various countries.  My fellow students and I learned from 20-30 theoretical and experimental physicists working and teaching in the field today.  Our lecturers taught various theoretical, experimental, and accelerator aspects of physics, specifically as it pertains to the current and future hadron programs at the accelerators COSY (Jülich), ELSA (Bonn), LHC (CERN), CEBAF (Jefferson Lab), BEPC (Beijing) and FAIR (Darmstadt) featuring experiments like PANDA which I will be working with for my senior research project.  Neutrino physics, laser physics, and heavy exotic particles were also discussed.

Our first day began with our introduction to hadron physics theory with Dr. Bastian Kubis from the University of Bonn.  We discussed effective field theory, symmetry/symmetry breaking and dispersion theory.   We were also introduced to experimental methods with Dr. Magnus Wolke from Uppsala University in Sweden.  He presented Monday, Tuesday, and Wednesday on various aspects of experimental particle physics.  Under his lectures, we examined at length the various detectors being utilized throughout modern particle physics, Dalitz plots and statistical analysis.  Magnus was my favorite speaker.  He spoke clearly, concisely and with a childlike excitement that made his lectures enthralling.  We finished the day with an introduction to our working groups, the main focus of our week in Julich.

Our goal for each working group was to prepare a proposal based on eight selected experiments.  These experiments were presented by leading researchers working in each field today.  Each student chose a working group, then worked under the supervision of these researchers all week and presented our proposal on Friday morning.  I joined the Polarized Proton Beam from Laser-plasma accelerator group working with Dr. Markus Büscher and Anna Hützen from Heinrich-Heine-Universität Düsseldorf.  On Friday we presented our presentation to a high-powered laser facility requesting laser time.  We outlined an experiment to create a polarized proton beam to be used as particle accelerator.   Our goal was to create a plasma using the laser and accelerate polarized protons up to energies of several MeV.

The highlight of HPSS was on Tuesday evening.  We toured COSY, the Cooler SYnchroton, at Forschungszentrum Jülich.  COSY is a proton accelerator, accelerating proton beams between and   In Mev.   COSY’s greatest discovery came in 2014.  Researchers working at COSY were the first to confirm exotic bound particles.  The tour was amazing.  We walked the complete path of the accelerator ring discussing in detail each element of the accelerator.  We studied the quad pole magnets used and took a lesson in electron and stochastic cooling of the particle beam.   Most exciting for me was the central straw tub tracker being built at COSY for the PANDA experiment.  The scientists at COSY were actively constructing it and had a working prototype on display.  We learned in depth how this form of detector works and were able to hold and inspect every piece of the detector as it was being built, including the mylar tubes, anode wires and end caps.

After our presentations on Friday, most of us hopped back on a plane to head home.  The whole experience was absolutely wonderful and has cemented for me a love of experimental particle physics.